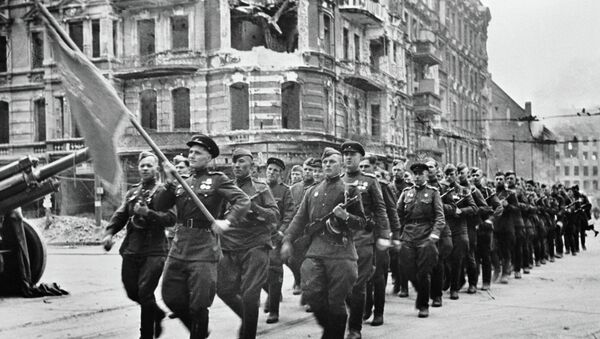 Saturday marks the 70th anniversary of the unconditional surrender of the Nazi German garrison in the Reichstag, and with it the end of the Battle of Berlin.

Raging from April 25-May 2, 1945, the Battle of Berlin served as the dramatic culmination of a brutal four year war between Nazi Germany and the Soviet Union, known in Russia and other former Soviet countries as the Great Patriotic War.

In the spring of 1945, combat operations on the territory of Nazi Germany were being conducted by Soviet, US, British and French forces. The Soviet forces were 60 kilometers from Berlin, while the advance units of the US-British forces reached the Elbe River 110-120 kilometers from the German capital.

For the Nazis, Berlin was not only a political base, but also one of Germany’s largest military-industrial centers. Leading up to the fighting, the Wehrmacht’s main forces were concentrated near Berlin. About 200 Volkssturm (national militia) battalions were deployed in the city, with over 200,000 men organized in the garrison. 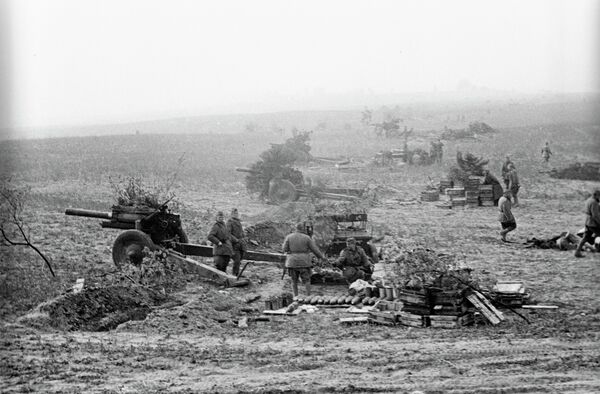 Soviet artillery forces before general passing to the Berlin offensive. April, 1945.
© Sputnik / Shagin
/
Go to the photo bank
The city defense was carefully thought-through and well-prepared. The Berlin defense area included three circular perimeters. The outside perimeter passed along rivers, canals and lakes 25-40 kilometers from the center of the capital. It comprised large built-up areas converted into pockets of resistance.

The 6 km-thick internal defense perimeter, which was thought to be main defense line of the fortified district, passed along the Berlin suburbs. Antitank obstacles and wire fences were installed on the streets. The third, inner city perimeter passed along the ring railway line. All of the streets leading to the city center were blocked by obstacles, including trenches, fortifications, barricades, and bunkers, while the bridges were prepared for explosive demolition. Nazi German forces made plans to use the 80-kilometer Berlin metro for stealth troop movements.

To ensure effective command and control of the defense operation, Nazi German forces divided Berlin into nine sectors. The central corridor, where the main government and administrative agencies, including the Reichstag and the Imperial Chancellery, were located, was the most heavily fortified sector.

The Soviet Supreme High Command’s plan for the operation was to deliver several powerful strikes on a wide frontage, split the enemy’s Berlin group, encircle it and destroy it piecemeal.

Estonian Red Army Veteran: Russians Never Doubted They Would Win
The Berlin operation began on April 16, 1945. After powerful artillery fire and airstrikes, the forces of the First Belorussian Front commanded by Marshal Georgi Zhukov engaged the enemy on the Oder River. At the same time, the troops of the First Ukrainian Front commanded by Marshal Ivan Konev began to cross the Neisse River. Despite fierce resistance, the Soviet forces breached the enemy's defenses.

On April 20, the assault operation began with a long-range artillery attack on Berlin by the First Belorussian Front. Toward the evening of April 21, its advance units reached the city’s northeastern suburbs.

On April 25, the forces of the First Ukrainian and the First Belorussian Fronts linked up west of Berlin, completing the encirclement of the Berlin group, comprising of 500,000 men, including Wehrmacht, SS, security and police forces, and Volkssturm militia, along with 3,000 heavy guns and 250 tanks. Against this, the Red Army concentrated 464,000 men, 12,700 guns and mortars, 2,100 rocket artillery units, and 1,500 tanks and self-propelled artillery.

The Second Belorussian Front crossed the Oder and, breaking through the enemy defense, by April 25, advanced to a depth of up to 20 kilometers. They pinned down the Third German Tank Army, preventing it from being used at the approaches to Berlin.

Even though it was clearly doomed, the Berlin group put up a fierce resistance. It was dissected by the Soviet forces into three isolated pockets in fierce street fighting between April 26-28.

The fighting continued round the clock. Advancing to the city center, the Soviet troops fought for every street and every building. Some days would see the freeing of up to 300 blocks. Hand-to-hand fighting erupted in metro tunnels, underground utility lines and underpasses. The main attack configuration during the fighting for the city was the assault group, consisting of rifle and tank units, reinforced by artillery, including 152 mm and 203 mm guns, for point-blank fire.

While WWII is History for Some, Remains Reality for Russia – Ex-US Official
Tanks operated both as part of combined-arms rifle units and tank corps and armies, placed under the operational command of combined-arms armies or operating in their assault zone. Attempts to use tanks independently led to heavy losses from artillery fire and Panzerfaust antitank rocket launchers.

The massed use of bombers was made difficult by the city being covered with heavy smoke. The most powerful air strikes on city targets were delivered on April 25 and 26, with a total of 2,049 aircraft involved in the attack.

By April 28, the defenders of Berlin controlled only the central area of the city, facing shelling by Soviet artillery from all sides. Toward the evening of the same day, units of the Third Assault Army of the First Belorussian Front approached the Reichstag.

The Reichstag garrison had about 1,000 men and officers, reinforced by units including the SS Division Nordland, the French battalion from the 15th Waffen SS Grenadier Charlemagne Division, and the Latvian Battalion from the 15th Waffen SS Grenadier Division, bringing the number of defenders to nearly 5,000. The garrison had a large number of machine-guns and antitank rocket launchers, including Panzerfaust, as well as artillery systems. The defense had seen the construction of deep trenches, obstacles and machine-gun and artillery emplacements around the building.

On April 30, units of the Third Assault Army of the First Belorussian Front engaged the Reichstag garrison, which put up stiff resistance. It was not until the evening, after repeated attacks, that Soviet troops would be able to break into the building.

The Nazis fought back fiercely. There was hand-to-hand fighting in the corridors and on the stairs. Assault units took control of the Reichstag building step-by-step, room-after-room, floor-by-floor. Fighting for the first floor of the Reichstag lasted 21 hours and 45 minutes. 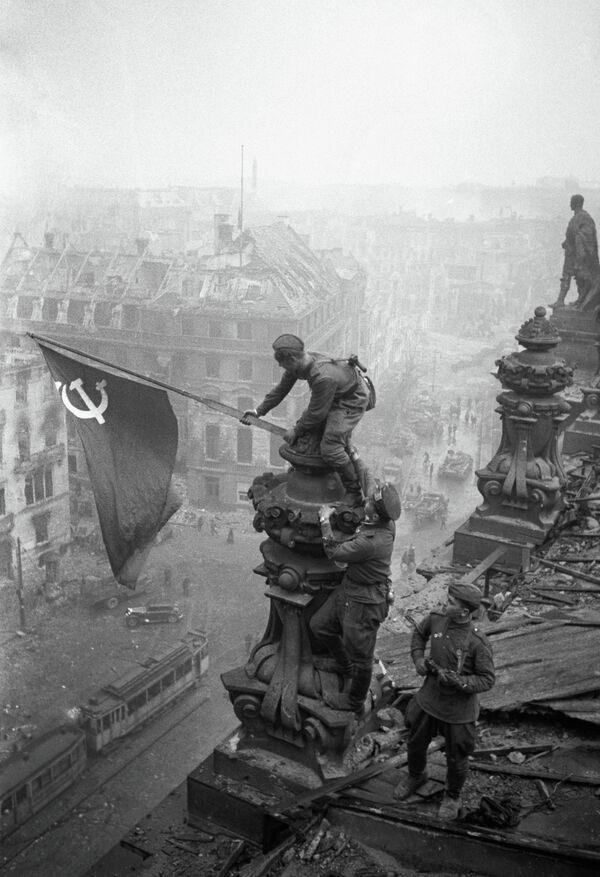 The Soviet soldiers’ path from the main entrance to the Reichstag to the roof was marked by red flags, big and small. On the night of April 30 to May 1, the Victory Banner (the Assault Flag of the 150th Rifle Division) was hoisted on the Reichstag roof. Fighting for the Reichstag continued until the morning of May 1, while some enemy groups, entrenched in the basement, only surrendered on May 2.

The Germans lost over 2,000 men and officers in the fighting for the Reichstag. The Soviet forces captured over 2,600 soldiers, 1,800 rifles and submachine-guns, 59 artillery systems, and 15 tanks and assault guns.

Veterans Urge Europe to Remember Soviet Union Contribution in WWII Victory
On May 1, units of the Third Assault Army, advancing from the north, met with the units of the Eighth Guards Army advancing from the south. Later in the day, two important defense nodes in Berlin surrendered – the Spandau Citadel and the Flakturm I flak tower (Zoo Tower).

On the morning of May 2, Nazi German forces sent a communication, in Russian: "Please stop firing. We have shipped negotiators to the Potsdam Bridge." Meeting with the Soviets on behalf of German forces, General Helmut Weidling reported on their willingness to end all resistance; crossing over to the Soviets at 6 am, Weidling wrote an order of surrender, which was spread using loudspeakers and radio. Routed and disbursed, the last remants of the German resistance were destroyed or captured by May 5. Some managed to flee west, crossing the River Elbe, and joining German units and refugees who crossed into the US occupation zone. The remains of the Berlin garrison – over 134,000 men, surrendered.

Results of the Berlin Operation

The fighting for the city is estimated to cost the lives of 125,000 civilians of Berlin’s population of 2 million, along with the destruction of wide areas of the city. Of the city’s 250,000 buildings, about 30,000 were completely demolished, over 20,000 were partially destroyed and over 150,000 sustained damage. Over one-third of the city’s metro stations were flooded and destroyed by sappers from the SS Division Nordland, and 225 bridges were demolished by Nazis sappers. 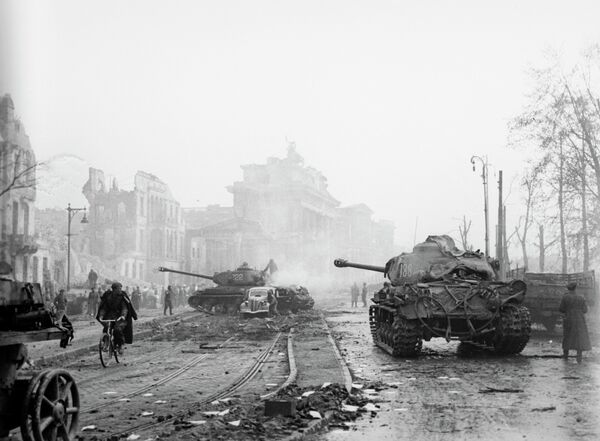 Fighting with separate groups attempting to break out of Berlin to the west ended on May 5. On the night of May 8-9, the Nazi forces signed the Act of Military Surrender.

During the Battle of Berlin, the Soviet forces encircled and destroyed the largest enemy group the history of warfare. They routed 70 infantry and 23 tank and motorized rifle divisions, capturing 480,000 men.

Group Raises Awareness for Elbe Day Through 1,500 Mile Road Rally
The Berlin Operation came at a very high cost for the Soviet forces. Their irrecoverable losses were 78,291, with 274,184 injuries. German losses are estimated at 100,000 killed and 220,000 injured.

Since 2007, the Victory Banner of the 150th Rifle Division raised on the roof of the Reichstag has been used in Russia as the official flag of Victory.