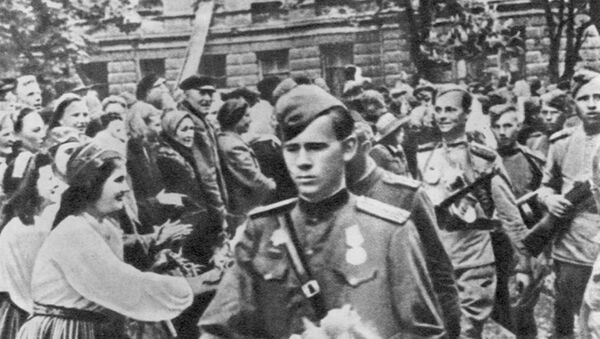 In an interview for Baltic news hub Delfi and Estonian newspaper Eesti Paevaleht, Red Army veteran Valentin Villemsoo shared his story about joining the Soviet army, escaping Tallinn, living through the Leningrad Blockade, and finishing the war. Having lived through it all, he considers himself lucky.

Asked by his interviewer whether he or any of his fellow soldiers ever believed that Germany could win, Villemsoo noted:

"I never felt this way, and did not notice it among the Russians, either. I was in besieged Leningrad. I never heard such conversations about Germany winning and the Russians losing. The political instructors worked well. Regardless of what was happening around them, we heard their chatter all the time."

Volunteering for the Red Army, Escaping Tallinn, Living Through the Leningrad Blockade

Villemsoo volunteered for the Red Army out of fear for his life. "I was afraid that I would be executed as soon as the Germans came, because I was a senior pioneer. I was responsible for organizing the work of pioneers in school. The pay was 250 rubles –this was good pay. And for studies one needed money."

By August 1941, the German offensive was reaching Estonia. "The Germans blockaded Tallinn. On August 27 we boarded a ship, and on the evening of August 29 it was sunk. We spent 16 hours in the Gulf of Finland, holding on a piece of wood. Then I went to Kronstadt, and later to Leningrad."

"I came to learn firsthand about the blockade of Leningrad. I know what it is like to have 300 grams of bread a day and flour, diluted with warm water [as a day's ration]. I survived, but lost so much weight that I could not even sit properly."

World
Historic Event: US Ambassador to Russia Sings Legendary Soviet Song
After joining the army and heading for the front, Villemsoo noted that "as a rule, on the front and in military school there was enough to eat. We were fed two times a day –mostly the same thing over and over: buckwheat or wheat porridge. Sometimes it happened that food could not make it to the front during battles. Once at Veliki Luki we captured a German stock. There was a lot of food. I especially enjoyed the Norwegian and Dutch canned fish, and canned fruit."

Asked whether he came to hate the Germans during the war, Villemsoo commented: "Of course I hated them; this hatred appeared even before the war. Our patriotic education from the time of [pre-war Estonian Republic President Konstantin] Pats was more anti-German than it was anti-Russian. It was directed against Bolshevism more than against the Russians."

The War Comes to a Close

As the war came to its end, Villemsoo was being trained as an officer to help finish off Nazi forces trapped in the Kurland Pocket, northwestern Estonia. He found himself on the way to the Front when the war ended. "On May 8 I was in Moscow, and saw the last of the fireworks. Moscow was already living a normal life; most of the rubble had been cleared; we traveled through the city by metro. The next morning, we went off to the front, and in Rzhev learned that the war was over."

"All of us, a hundred young kids, remained alive! If we had taken part in the last battles in Courland, who would be left among us? We were lucky," the old soldier recalled emotionally.

"Rzhev was in ruins. There was no station there; instead there was only one train car. But the area around the station was full of people: all older people. There was no youth; they were all in the army, even the girls. Babushkas and old men came up to soldiers and asked 'Have you seen my Kolya [diminutive for Nikolai]?' Then another 'Where you served did you see my Vovka [diminutive for Vladimir]?'"

World
Nationalism Leads to Downplaying of Soviet Role in World War II
Villemsoo continued: "From there we went on to the Latvian city of Daugavpils. We were sent home from Kurland in July 1945…We cleaned ourselves up, and went to Estonia on foot. There was talk about us not being given a train, but we wanted to walk. As a result, 20,000 men returned [to Estonia]. Some historians may argue about the details. In Tallinn there were about four or five thousand."

A Brother in the German Army

Villemsoo recalled that his brother volunteered for service for the Germans. A handy mechanic and an electro-technician, the brother served on both the Western and Eastern fronts. "Units were formed to create a communications link between defensive structures built on the Atlantic coast. When the situation in Estonia worsened, they were transferred to Narva. And in December 1944 he was drafted into the Soviet army and sent to fight the Germans in Kurland," Villemsoo explained.

Revealingly, Villemsoo noted that his relations with most Estonians serving in the German army "were very good, nothing to worry about. And one more thing: I remained to serve in the Soviet army, and in my platoon half of the people had previously served in the Germany army."

Regarding the 2015 War Drama '1944' by Estonian Director Elmo Nuganen

"I can say only positive things about [the film]," Villemsoo stated. "99 percent is accurate. The only thing I would argue are the last two minutes of the film, where a man in an NKVD uniform gained command and ordered the execution of minors. I do not remember such things happening. Moreover, there were no people in NKVD uniforms at the front. There was the SMERSH –counterintelligence, dressed in ordinary uniforms. I do not recall a single case of a commander shooting his subordinate for failing to carry out an order."

Villemsoo explained to his interviewer that since January 1st, 2014, when he listed 90 army veterans in his notebook, "there are 29 less now. About 16-20 of us meet regularly; some among them are blind, others deaf, others still unable to walk. We joke with one another, recognize one another. The average age among us is 91-92; I'm 92 myself. We meet up on the first Wednesday of the month at [a local] pensioners recreation center. On May 8 we go to the center of Russian culture; there is a concert held there; a troupe comes from Leningrad [St. Petersburg]. On May 9 we go to cemeteries, and celebrate altogether on May 13. When it comes to alcohol we drink only white wine, for medical reasons."

World
While WWII is History for Some, Remains Reality for Russia – Ex-US Official
While many Estonians were drafted or volunteered into German forces during the Great Patriotic War, many others joined the Red Army. The most famous among Estonian formations was the 8th Estonian Rifle Corps, a formation of the Soviet Army created in November 1942. The Corps was formed from among Estonians from the Republic of Estonia, mobilized in Russia, and ethnic Estonians from across the country. Estonians also served in other units, showing heroism on par with all the other nationalities of the Soviet Union. Nine Estonians became Heroes of the Soviet Union, the highest distinction possible. It is estimated that 21,200 Estonians gave up their lives serving in the Red Army, with 50,000 civilians also estimated to have been killed during the war.
Newsfeed
0
Access to the chat has been blocked for violating the rules . You will be able to participate again through:∞. If you do not agree with the blocking, please use the feedback form
The discussion is closed. You can participate in the discussion within 24 hours after the publication of the article.
To participate in the discussion
log in or register
loader
Chats
Заголовок открываемого материала