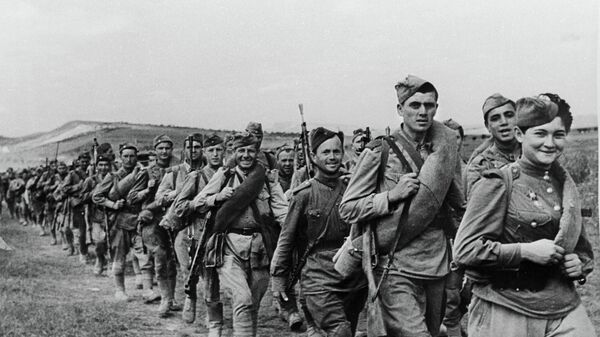 © Sputnik / Israel
/
Go to the mediabank
Subscribe
International
India
Africa
All the European countries want to say that they played the major role excluding the USSR, according to to Mark Sandle, history professor at The King's University in Alberta, Canada.

West's Historical Revisionism of WWII 'Disturbing' – Spanish Historian
MOSCOW (Sputnik) — The incorrect attribution of World War II military success by certain modern governments leads to a downplaying of the role of the Soviet Union in the struggle against Nazism, experts interviewed by Sputnik said.

“It is understandable that there is a patriotic attachment to national contributions to the defeat of Nazi Germany – and governments tend to encourage it. That this leads to a downplaying of the Soviet contribution is certainly unfortunate, but somewhat predictable,” Alexander Hill, associate professor at the University of Calgary, said.

According to the expert, Hollywood has undoubtedly played a role in focusing people’s attention to the contributions of the United States in the war.

Geoffrey Hosking, professor emeritus of Russian history at University College London, told Sputnik that all nations tend to attribute military success to themselves, even when not fully justified.

World
While WWII is History for Some, Remains Reality for Russia – Ex-US Official
“But the British are especially insular and ignorant of the outside world,” he said.

“I have done my best throughout my career to teach the truth to students about 20th century European history, and my colleagues have also, but the voice of the right-wing press is evident,” the professor added.

According to Mark Sandle, history professor at The King's University in Alberta, Canada, the moral unambiguity of the fight against Nazism has allowed countries to emphasize their bravery by creating a simple and easy-to-understand narrative of victory.

“The essential problem is of nationalism and ethnocentrism. Each nation wishes to continually construct a narrative about itself which emphasizes its heroism and its courage and highlights times where it acts justly and nobly,” he told Sputnik.

These narratives are displayed in educational curricula, commemoration events, as well as within the entertainment industry, the expert explained.

“So all the European countries want to say that they played the major role,” Sandle said, adding that this “obviously excludes the USSR.”

The Soviet Union World War II casualties are estimated to have exceeded 27 million, both military and civilian. The number of military dead was more than 8.7 million, more than a half of the 14 million allied casualties.

According to a poll conducted by ICM Research for Sputnik News Agency, 22 percent of Europeans do not know who liberated the continent from Nazism during WWII. Only 13 percent of respondents said they believe the Soviet Union played a major role in the outcome of the war.

Over 3,000 people in Germany, the United Kingdom and France were interviewed for the poll.