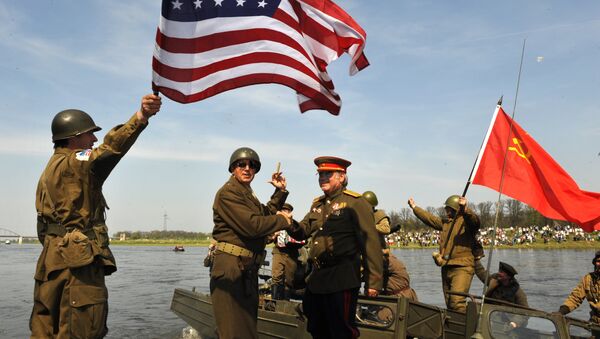 A weeklong road rally to raise awareness of Elbe Day has kicked off in the US state of Florida and is on the way to Washington DC, according to organizers.

NEW YORK (Sputnik) — Soviet and US troops linked on the river Elbe in the German city of Torgau in April 1945, marking an important step to ending the Second World War.

“The event was formed to honor veterans from both Soviet and American armies who met on Elbe Day, April 27, 1945,” Russian-American Community Center of Florida President Jeff Gray told Sputnik on Monday.

Gray noted that the 1,500 mile rally to honor Elbe Day, which includes a motorcade of cars, as well as a custom painted lead car, has had a positive reception.

“We’ve made four stops so far and each time we see Post Soviet and American veterans there along with enthusiastic crowds waving flags and singing familiar songs,” Gray said.

American and Soviet soldiers during the Elbe Day, 1945 pic.twitter.com/1ltsh8mvIO

The rally left Naples, Florida on Saturday and is on its way to Washington, DC, where a reception will be held at the Russian Embassy to honor Elbe Day.

Gray explained the need for a rally comes from the fact that much is known about the upcoming May 9 Victory Day that marks the surrender of Nazi Germany to the Soviet forces in 1945, but relatively little is known about Elbe Day in the United States.

“It is unfortunate that many Americans are not familiar with Elbe Day, though many recall a time when Russia and the US worked together,” Gray said. “The results of the Cold War greatly diminished this event from history books and remembrance.”

Gray went on to mention that the rally is not political in nature, but is meant to honor the veterans of the Second World War.