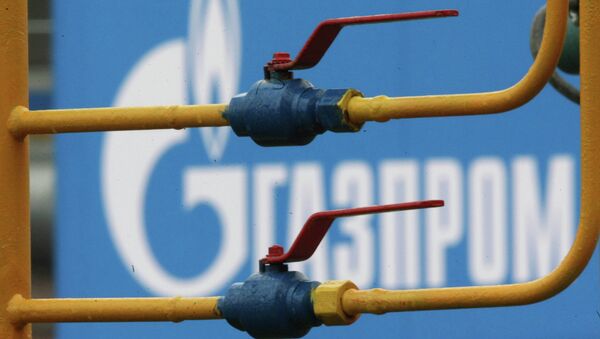 © Sputnik / Ilya Pitalev
/
Go to the photo bank
Subscribe
Speculation that the proposed Russian-Turkish gas pipeline could be extended into Greece as part of a plan to supply Europe with gas has heightened with a meeting between the chief of Russian gas company Gazprom and Greek government officials in Athens.

Alexei Miller, Gazprom's management committee chairman is to meet Greek Prime Minster Alexis Tsipras and Energy Minister Panagiotis Lafazanis on Tuesday as part of a number of ongoing discussions between officials and business figures of Russia and Greece.

And while Greek officials have been coy on the details of the meeting, it is thought that discussions about a possible Greek extension of the gas pipeline will be at the top of the agenda, as Athens continues its struggle to meet European bailout payments.

It had been reported that Tsipras had come to an agreement with Moscow to allow the Turkish transit stream to pass through Greece on its way to central Europe, however there has been no confirmation of these reports.

Meanwhile, there was heightened speculation over the prospect of a Greek transit line deal over the weekend, when Greek government sources reportedly told German and Greek media that Russia would be willing to pay more than $5 billion in advance for transit charges.

Despite the rumors, Russian officials have once again dismissed these claims.

Gazprom's decision to pursue the Russian-Turkish stream gas pipeline comes after the abandonment of plans to build a South Stream pipeline that would have transported Russian gas under the Black Sea, through to Bulgaria and then onwards to other parts of Europe.

These proposals have been put forward as alternative plans to current methods of transporting gas through Ukraine, with Gazprom saying it intends to stop using Ukraine as a transit country by 2020.

Instead of being transported through Bulgaria, the Turkish line features a proposal to transport gas from Russia through to the Turkish-Greek border, where it would then need to be collected by European consumers.

However, Jonathan Stern, senior research fellow from the Oxford Institute for Energy Studies believes this will create some problems, as European consumers will insist on the gas being transported to existing pick-up points in central and eastern Europe.

He says that such proposals may lead to a tussle between Gazprom and European consumers, and believes there may be some difficulties in pursuing gas pipelines through Greece.

"Gazprom is saying 'from the end of 2019 you guys need to pick up your gas from the Greek border' — but that isn't going to happen. Some of it could happen by the early 2020s, but not unless they make some very different arrangements."

However, Mr Stern believes the plan to use Turkey as a transit gas location is a smart decision, and can be beneficial for all parties if some plan tweaking is done.

Putin and South Stream: If you don’t like how the table is set, turn over the table. Francis Underwood — http://t.co/P0JGse6BPx

He says it will be feasible if Gazprom reverses the flows down the existing trans-Balkan line — which currently runs south through Romania and Bulgaria — to allow gas to run north through to central Europe.

"A resolution is — Gazprom builds two lines of Turkish stream. One goes to Turkey and has nothing to do with the EU, while the second one reverses up the trans-Balkan line, and those countries take the same gas, but instead of it flowing from the north, they take it flowing from the south."