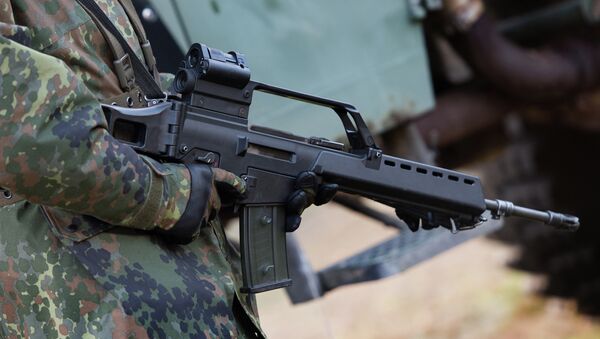 Germany to Put 100 Mothballed Tanks Back Into Service
A study commissioned by the Ministry of Defense revealed serious flaws in the mass-produced G36 assault rifle. Reportedly, the rifle tends to heat up during continuous fire and becomes unreliable under changing ambient temperatures with the hit probability decreasing after just a few shots.

The revelations contained in the 372-page report may come as a serious blow to Defense Minister Ursula von der Leyen, a close ally and confidante of Chancellor Angela Merkel.

The German military leads a NATO rapid response force in Eastern Europe to defend European countries, including Poland, Latvia, Lithuania and Estonia against an imaginary threat from Russia.  The formation of the elite intervention force is part of a systematic military buildup by NATO in Eastern Europe, aimed directly at Russia. Ursula von der Leyen said some 4,000 of the corps’ troops will soon be taking part in a joint military exercise in the Baltics.

However, it now appears that the Bundeswehr has little to fight with amid reports of serious flaws found in its armored vehicles and now in the mass-produced G36 assault rifle.

A special commission has been set up to determine whether the rifle poses a real threat to a soldier’s life.

Ursula von der Leyen knew about the problems with the G36 already in late March and planned to recall 167,000 faulty units.

The rifle’s manufacturer, Heckler & Koch Company rejected the experts’ criticism though and threatened to sue the government.

The G36 was designed in the early 1990s by Heckler & Koch Company (HK). It was intended to replace the ageing G3 rifle in service with the Bundeswehr.

In April 2012, reports surfaced that G36 rifles used in Afghanistan would overheat during prolonged firefights after several hundred rounds were fired.

Overheating affected the accuracy of the G36, making it difficult to hit targets past 100 meters, ineffective past 200 meters, and incapable of effective fire past 300 meters. The G36 has been called unsuitable for long battles.

HK said the rifle was not designed for sustained, continuous fire.