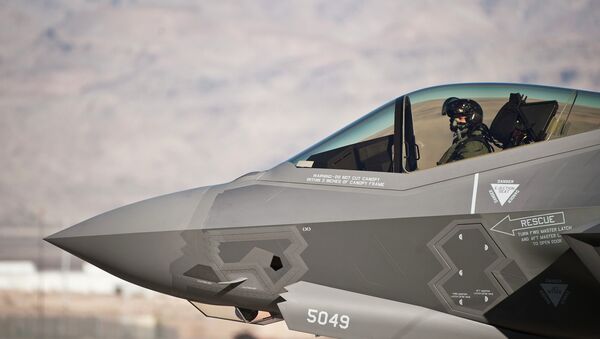 © Flickr / US Air Force
Subscribe
International
India
Africa
A new set of software problems may mean yet another series of delays for the F-35 fighter, already the most expensive and troublesome military equipment project in US history.

The stealth fighter is supposed to come equipped with sophisticated software systems to do everything from detect incoming threats to spotting maintenance problems on board to communicating it all to ground control.

Earlier in the year it was reported that the sensors were producing a high rate of false alarms. Now the problem is with the maintenance assessment system that was supposed to radically simplify the upkeep process for the jets.

Pentagon Promises Tough Review of its Struggling F-35
At issue is the Autonomic Logistics Information System (ALIS), an external software system that is supposed to be plugged into the jet and give a thorough and accurate assessment of what maintenance needs to be done, what parts replaced or checked.

False alarms are once again the problem, as maintainers at Eglin Air Force Base, Fla. say that 80% of the issues reported by ALIS are "false positives." A house armed services subcommittee that visited the base also heard that the systems were sluggish, to the point of slowing down the maintenance they were supposed to be speeding up.

"When we asked them how many false positives, I thought it would be a high number because it is a new system," Rep. Mike Turner (R-Ohio) said during a hearing Tuesday about the program's $10 million funding request the next year. "But when they said 80, I was taken aback."

Lt. Gen. Christopher Bogdan, the executive officer in charge of the F-35 program, said that the ALIS program, which currently comprises 5 million lines of code — "has a long way to go." and that ALIS was treated like an afterthought for too much for the fighter's development.

The problems exist in all three of the F-35 variants, designed for the Air Force, Marines and Navy.

Still Not Ready? Pentagon Extends F-35 Software Flaws Testing
The Marines are so far scheduled to be the first branch to have an F-35 reach "initial operational capability," and recently promised a tough review of the fighter's capabilities in a push to make their July 2015 deadline to have the jets ready for use. But the problems just seem to keep rolling in.

"The issue of false positives is very real," said the assistant secretary of the Navy for research, Sean Stackley. "The concerns with regards to the reliability, responsiveness, the timeliness of ALIS informing the war fighter is at the top of our priority list."

The sheer size of the ALIS system — on computer racks weighing around 1,000 pounds — has also made it too large for use in testing on carriers and a smaller version is supposed to be ready by July.

In addition to the false positives and false alarms, there were recent problems reported with the systems' ability to fuse data together when four fighters were in the air at one, forcing the Marine corps to modify operations so that four jets would fly as two teams of two jets, instead of one integrated team.

Meanwhile the aircraft carrier specifically optimized to accommodate the F-35 will itself need 40 additional weeks of upgrades to handle the plane. The USS America  - which cost $6.8 billion to begin with — will have to spend almost a year in dry dock being adapted to the fighter is was designed to be adapted to.

"Acquisition Malpractice" And Other Nicknames for the F-35

Pandora’s Box: Pentagon Sums Up F-35’s Many Malfunctions
Since the program to develop the fighter jet began in 2001, it has seen costs soar even as deadlines are pushed back repeatedly. Senator John McCain (R-AZ) — hardly known as an outspoken critic of the military — called the program “one of the great national scandals that we have ever had, as far as the expenditure of taxpayers’ dollars are concerned.”

In 2008 the RAND corporation — a think tank that works closely with the US military — reported on a series of war simulations involving the F-35 and their analysis was leaked to the press with its pessimistic conclusions. "Inferior acceleration, inferior climb [rate], inferior sustained turn capability," the analysts wrote. "Also has lower top speed. Can’t turn, can’t climb, can’t run."