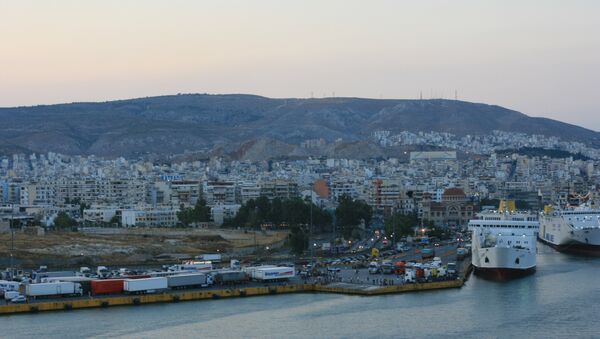 As EU countries are continuing to speculate about Greece’s economic situation, the latter is staking on partners beyond the European region and expanding its international cooperation.

Over the last few months, many European countries and the US have increasingly criticized Greece and its new government for its inability to repay its external debt and pull the country from the brink of economic collapse, speculating about its possible withdrawal from the eurozone and even the EU.

However, despite the EU’s dark forecasts about Greece’s future, the country’s officials don’t seem to be as worried as their European colleagues, further expanding their economic ties with countries beyond the European continent.

Could Greece Be Key to Restoring Ties Between EU, Russia?
Thus, Greece’s current Prime Minister Alexis Tsipras stated that the Greek government will sell the majority of its share in Athens' Piraeus Port Authority, a government company providing services in the Port of Piraeus, a major see port of the country. The most likely potential buyer is China.

The state-owned Authority runs only one part of the port, while another part is under the supervision of the Chinese company (COSCO). The company was given the license to operate the port in 2008, what “proved to be one of the [best] investments of the past few years”, according to Former Greek Shipping Minister Miltiadis Varvitsiotis.

Greece Expects Financial Dividends From Turkish Stream After 2019
Now, COSCO may get an opportunity to buy the other part of the port if the Greek government makes up its mind and allows privatization. The move could be beneficial for both sides as it would allow China to assert its economic position in Europe and help Greece to get additional investments. The company transfers about €30 million to Greece annually, according to the German magazine “Der Spiegel”.

At the same time, the initiative is considered controversial among a number of politicians and employees. The number of discharges may increase, while labor disputes and complaints about overburdened port workers could become common practice among those who work for the COSCO run sector.

According to “Der Spiegel”, workers have to follow the Chinese motto "hard work — happy life." Thus, increased Chinese investments may lead to toughened working conditions and to a situation where the social gains, particularly promoted by the new Tsipras government, may start to collapse.