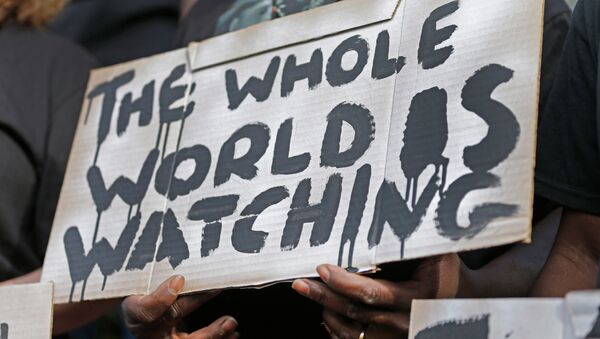 North Charleston’s police force finds itself in the national spotlight as murder charges after a video surfaced of Officer Michael Slager shooting a fleeing unarmed man in the back. But this was not the first time Slager has been accused of excessive force, and the department itself has a long history history of alleged abuse.

In 2013, Slager was accused of using his taser on a man without reason. The officer was exonerated, but witnesses claim investigators never followed up with them.

The incident took place in the middle of the night, as a man was awoken to the sound of Officer Slager banging on the door saying, “Come outside or I’ll tase you!”

This indicates the officer was threatening to use the weapon as a punishment, instead of as a necessary method to gain compliance and protect himself in a dangerous situation.

"I didn't want that to happen to me, so I raised my arms over my head, and when I did, he tased me in my stomach anyway," Givens told the Associated Press. "They never told me how they reached the conclusion. Never. They never contacted anyone from that night. No one from the neighborhood."

The department itself also has a lengthy record of abuse allegations itself.

In a shocking lawsuit, a man named Sheldon Williams claims that he was asleep at a motel in North Charleston on Nov. 19, 2011, when five officers burst through the door.  The man attempted to hide under the mattress, and was pinned to the concrete floor.  After handcuffing him, the officers allegedly began taking turns stomping on the face of the unarmed African-American man.

Williams’ injuries were so visibly severe that the jail officials had to turn him away and have him taken to the hospital.  He did not arrive at the hospital until two hours after the beating occurred.  The hospital diagnosed him with a fractured cheekbone, a depressed fracture to the left orbital floor of his face, and a fracture on his left sinus wall.

The hospital reportedly provided law enforcement with instructions to have him see a special surgeon within a week, instructions that were ignored, and Williams was never treated.  The man claims to have been in agonizing pain and to this day still has trouble sleeping and faces long-term neurological damage.  The nerve damage was so severe, that he claims to experience the sensation of insects crawling on his face, Salon reported.

None of the officers accused of assaulting Williams were terminated from the force.

Over the past five years, officers in South Carolina have fired on suspects 209 times, and while a few have been charged, none have ever been convicted of wrongdoing.

One suit came from a woman who could not afford her $373 fine and began crying hysterically as she was forced to spend 30 days in jail.  As she sobbed, she says Officer Timothy Blair broke her arm.

In a lawsuit filed in the case of Asberry Wylder, a mentally disabled man who was shot and killed by North Charleston police, witnesses claim that Wylder was pepper sprayed and beaten before being shot twice, they also allege that the man was in handcuffs at the time.  The judge decided in favor of the department in 2007.

In 2012, Brian Yates, a soldier who had previously won the Global War on Terrorism Service Medal, sued the department after he claimed he was pulled over and tased three times in the back by an officer who had twisted his arm while yanking him from his vehicle.  That trial is expected to begin in May.

In August 2013, the department was sued in federal court by a woman named Evelyn DeVillegas who claims she was standing in a parking lot with relatives and friends when a North Charleston police officer arrived and began to make racist remarks and harass her.  The officer reportedly stated, you “are probably a wetback, …I bet you’re not legal,” before arresting her.  That case was dropped at the end of last year.

Robert Wayne Bishop has also filed a lawsuit against the department after a 2011 encounter.  Bishop claims that the officer told him that “he was stopped randomly because he was driving through a high drug trafficking area,” according to federal court documents.  He claims that he was ordered out of his vehicle and then smashed face first into the pavement as an officer used his knees to push into his neck and drag him by his feet.

“Another North Charleston Police Officer, Daniele, arrived on the scene with his canine and allowed the dog to ‘nip’ at Plaintiff, who sat in the road while handcuffed and bleeding from his nose and face,” the lawsuit stated.  “As a result of the force … Plaintiff suffered a broken nose, a broken tooth, and a lacerated lip, all of which required surgery.”

The police claimed that Bishop had resisted arrest and the case was dismissed in 2013.

At a press conference on Thursday afternoon, Slager’s alleged previous victim, Mario Givens, stated, "What came to my mind is if they had tried to listen to me that man might have been alive, because he wouldn't have been an officer in the field.”