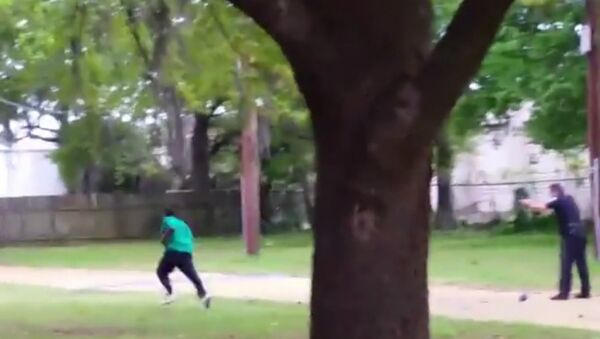 Dozens of demonstrators took to the streets of North Charleston, South Carolina on Wednesday to protest the shooting death of unarmed Walter Scott by a white police officer.

The organizers of the demonstrations said they are protesting because this type of behavior has to stop, pointing to other cases – Ferguson, Missouri and New York City, among others – where they say police overstepped their authority.

"We have to take a stand on stuff like this," said protester Lance Braye, who helped organize the demonstration. "We can't just shake our heads at our computer screens,” he told The Associated Press.

Dramatic video filmed by an unidentified witness shows Officer Michael Thomas Slager shooting the man in the back after a traffic stop.

Scott fell after the eighth shot. Scott’s parents appeared on several morning TV shows on Wednesday, saying their son probably ran because he owed child support and didn’t want to go to jail.

Scott's family called for calm and peaceful protests, adding that the murder charge indicates that the justice system is working. The family says they plan on suing the North Charleston police department.

Scott had originally been stopped for a faulty brake light. Slager was charged on Tuesday and could face from ten years to life in prison without parole if convicted. He has been with the police force for five years.

The FBI is also investigating the fatal incident.

This latest confrontation is one in a series of deaths of unarmed black men at the hands of law enforcement agents. The incidents have sparked protests — some violent — in several cities across the country and started a grassroots movement known as Black Lives Matter.