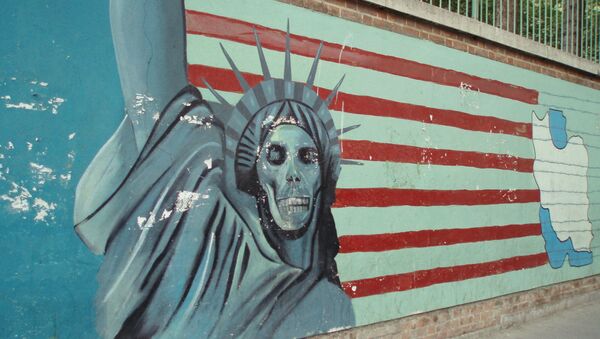 Finian Cunningham
All materials
American sponsorship, simultaneously, of Neo-Nazis waging ethnic cleansing in Ukraine and of Arab dictators bombing an impoverished Yemen is stark testimony to the true nature of US power. Unmasked from unctuous vanity and virtuous pretensions, the ugly face of Washington is fascism and dictatorship.

Ukraine and Yemen, to some, may seem disconnected theatres. Not at all. The American-backed lawlessness and barbarity running amok in both countries are an integral function of how US power really operates in the world; not as a recent aberrant phenomenon, but rather going back to the fundamentals of how the American ruling class functions under capitalism.

As the death toll among civilians mounts in Yemen, aid agencies are warning of a humanitarian catastrophe in the Arab Peninsula country. Rundown hospitals can't cope with the droves of injured, many of them children suffering severe burns.

Yet this week Washington announces it is stepping up its weapons supplies to the coalition of Arab states led by Saudi Arabia that has been bombing Yemen for nearly two weeks.

US Army Colonel Steve Warren announced that the weapons are "a combination of pre-existing orders to our partners [sic] and some new requirements."

The American "partners" among the Saudi-led blitzkrieg on Yemen include the Persian Gulf monarchies of Qatar, Kuwait, Bahrain and the United Arab Emirates, as well as Jordan and Egypt.

All of them dictatorships where human rights and freedom of speech are brutally suppressed.

Just this week, Saudi and Bahraini state forces hauled many of their own people into prisons in a vicious crackdown simply because they were voicing protests against the bombing of Yemen.

Among the US-supplied weapons to its "partners" murdering Yemeni children and families — in the name of regional security – are ammunition, bombs and precision-guided missiles. The latter ordnance is "to compensate for the absence of Saudi-allied soldiers in Yemen to provide targeting information," according to a McClatchy news report.

Devil is in Western Interpretation of Iran Nuclear Deal
That's an oblique admission that the US-backed foreign air raids have little or no mandate from within Yemen. So, this bombing campaign is simply what it is: naked foreign aggression — the supreme war crime, as defined during the 1946 Nuremberg Trials of Nazi war criminals.

The arrival of more American "precision-guided missiles" in Yemen will also hardly bring much consolation to families whose homes have been destroyed over the past two weeks. This week a family of nine was obliterated when a Saudi air strike reportedly hit their home in Anat, Saada Province, in northern Yemen. Just one case of countless innocent victims being slaughtered by American weapons.

US aircraft tankers are refuelling the hundreds of American-supplied F15 fighter jets pounding Yemen. However, a Pentagon spokesman told media this week that the tankers were refuelling Arab-flown warplanes "outside Yemeni airspace" — as if that distinction somehow mitigates American involvement in the murderous aggression. It's the inane equivalent of former President Bill Clinton once admitting to smoking dope, but he "didn't inhale". "Yes, we're refuelling bombers, but we're not inhaling Yemeni airspace."

In addition to bombs and missiles, Tony Blinken, the US deputy foreign secretary, was in Saudi capital Riyadh this week to firm up "intelligence sharing" with the Saudi-led bombing coalition. The newly setup American "joint fusion centre" in Saudi Arabia to "oversee the air campaign" is being headed by Marine Major General Sam Bundy. That shows, if further proof were needed, that Washington is the real brains behind this international gang-rape of Yemen.

"Saudi Arabia is sending a strong message to the Houthis [rebels] and their allies that they cannot overrun Yemen by force," said Blinken while being entertained by the House of Saud, a regime that imprisons or decapitates anyone who dares to voice criticism of its despotic rule.

A fair response to Blinken's "strong message" that rebels cannot overrun Yemen by force is: "Why not?" After all, America overruns countries all the time by force, killing millions of people in the process, as in Iraq, Afghanistan and Libya; and its Saudi partners have tried to do the same "overrunning by force" for the past four years in Syria by sponsoring head-chopping Wahhabi terrorists.

In any case, the Houthi-led uprising against the US, Saudi-backed puppet former president Abd Rabbuh Mansur Hadi has widespread support among the Yemeni population. Hadi fled the country two weeks ago to avail of luxurious sanctuary in the House of Saud, from where he is calling for air strikes on his own country, allegedly to "defeat the Houthis".

This puppet has no mandate and no credibility other than the fraudulent image bestowed on him by his patrons in Washington and Riyadh. The people of Yemen kicked him out and don't want him back. As even the London-based Financial Times reported this week: "Yemen anger grows as absent president cheers attack".

Power Play Behind Regime Change in Russia
So that's the dictatorship arm of Washington's global power. It's other limb is Neo-Nazi fascism, as patently seen in Ukraine — provided, that is, you don't read or watch the Western news propaganda services.

This week the Western-installed regime in Kiev, which came to power in an illegal coup in February 2014, appointed the leader of the fascist paramilitary Right Sector as "chief advisor" to the Ukrainian Armed Forces. This elevation is in spite of the fact that Dmitry Yarosh is on Interpol's wanted-list for crimes committed by the Nazi SS-styled Right Sector against civilians in eastern Ukraine over the past year.

Yarosh and his paramilitary shock-troops, as well as senior political figures in the Kiev regime, including the prime minster and president, venerate and glorify Ukrainian fascists of earlier times. Those "hero" fascists collaborated with the Nazi Wehrmacht in the extermination of millions of fellow Ukrainians, Poles, Hungarians, Roma, Jews, Russians and others during the Second World War.

Now the Kiev-run secret police, the SBU, has also openly announced that it is adopting organisational methods that were once used by the Nazi-collaborating Organisation of Ukrainian Nationalists, formerly led by Stepan Bandera.

Furthermore, the Western-sponsored oligarch-president Petro Poroshenko is moving to adopt "special powers" under martial law that will allow his security forces to detain, en masse, ethnic Russians within Ukraine who are deemed a "terror threat". This follows Poroshenko's recent decree to ban all Russian-language films, documentaries and news media.

This is all because the regime that Washington installed in Kiev, with CIA murderous dirty tricks in the infamous sniper shootings on February 20, 2014, has an ideological hatred toward Russia and Russians.

This is consistent with the same fascist ideology of its Ukrainian "heroes" during WWII whose mission was to exterminate Russian "sub-humans" as part of the Nazi Final Solution.

The US government is supplying weapons, equipment and military trainers to the fascist armed forces that are under Kiev's command. These forces are continually undermining the fragile ceasefire that is currently in place in eastern Ukraine. Russian Foreign Minister Sergei Lavrov has accused Washington of, in effect, aiding and abetting ceasefire violations.

The suspicion is that the US wants its de facto Neo-Nazi foot-soldiers to resume hostilities in eastern Ukraine with the long-held, bigger-picture strategic view of destabilising Russia and eventually eliciting "regime change" in Moscow — just as Washington arrogates to do against any state, anywhere in the world that dares to oppose its unbridled hegemony.

US, World's Biggest Bully, Must Be Isolated by Its Allies – Eric Zuesse
Today, these are the unmistakeable dark forces whom Washington is fully integrated with — openly and unreservedly — fascism and dictatorship.
For many people around the world, this historical alignment may seem disorientating. They will respond incredulously and plaintively: "But surely America is the land of the free, the defender of the free world, and the proclaimer of democracy, international rule of law and human rights?"

Well, it's time to unplug from the chronic brainwashing. The United States has always been a plutocratic, imperialist behemoth that has relied on fascism and dictatorship to achieve its geopolitical objectives of total hegemony. The extermination of the North American natives was but the opening salvo, carried on by genocide of African slaves and their descendants, leading to the early colonial conquests of Mexico, Central America, the Caribbean and the Philippines.

Later, the American capitalist elite worked surreptitiously with European fascism, including Nazi Germany, during the 1920s and 30s to suppress socialist movements and maximise profits. That covert policy was interrupted for necessary tactical reasons during WWII to defeat its rogue fascist clients. But it was promptly resumed at the end of the war with the American sponsorship of fascism in Greece, Turkey and behind enemy lines in the Soviet Union, primarily in Ukraine.

The CIA recruited Wehrmacht agents and collaborators to deploy as saboteurs and terrorists against the Soviet Union during the 1950s and 60s. The present-day American sponsorship of Neo-Nazis in Kiev is therefore nothing other than a continuation of systematic policy.

Washington worked with fascists and military dictators in every corner of the globe during the Cold War, from Latin America to Africa to Asia.

Subversion of democratically elected governments and the brutal suppression of pro-democracy movements were standard operating procedure for the American "master race". The American self-proclaimed "exceptional nation" of "manifest destiny".

The presumed Cold War antagonism against the Soviet Union was but the cover story for the real, core narrative of ruthless pursuit of American hegemony, no matter at what nefarious price to democratic and human rights.

American historian William Blum enumerates that Washington was involved in the overthrow of more than 50 constitutional governments around the world during the five decades of the Cold War, resulting in over 25 million deaths from US-engendered civil wars, wars of aggression, dirty counterinsurgency wars, and despotic repression, as currently seen in Ukraine, Saudi Arabia, Bahrain, Egypt and other US "partner" dictatorships.

When we see the "partners" that Washington consorts with today, it must be understood that this is not some mere unfortunate quirk of history, alien to "true Americanism". It is totally in line with the real nature of American power and how it has always operated. Fascism and dictatorship are the true, ugly face of America.

The final irony perhaps is that it is the vast majority of ordinary people within the US who are now beginning to learn the harsh truth about their much-vaunted "American democracy" — and they are learning it the hard way.

It's a cruel awakening to the reality of rampant police state violence, the collapse of democratic rights and the untrammeled hedonism of its super-rich militarised oligarchy.