Devil is in Western Interpretation of Iran Nuclear Deal 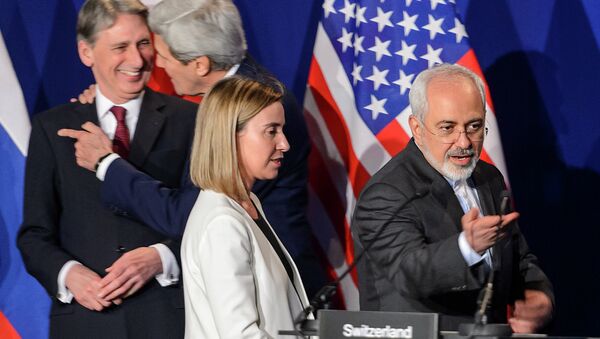 Finian Cunningham
All materials
A closer look at the details of the so-called framework accord to emerge from Lausanne shows that Iran falls short on both counts of sanctions removal and nuclear rights.

After investing so much political capital in achieving a nuclear deal, it is understandable that all sides of the stand-off would claim the Lausanne accord arrived at this week to be an "achievement".

US President Barack Obama declared it "an historic" landmark in American-Iranian relations, while Russian Foreign Minister Sergei Lavrov hailed it as a success in which all key disputes are settled.

Iran's Foreign Minister Mohammad Javad Zarif was greeted as a hero by jubilant Iranians on his return to Tehran from Switzerland.

Iran's Nuclear Deal to Incite Arms Race Among Sunni States - Netanyahu
Zarif emphasised that the framework accord produced in Lausanne after more than a week of intense negotiations will allow Iran to continue enriching uranium and that none of its nuclear research facilities would be shut down, as Washington and its Western allies had previously demanded.

Another crucial point made by Zarif was that all economic sanctions imposed on Iran by the West and the United Nations Security Council would be lifted "immediately" on conclusion of the final Joint Plan of Action comprehensive agreement, scheduled for signing on June 30.

Iran's need to talk up the diplomatic success is understandable. After all, President Hasan Rouhani was elected in 2013 on the ticket that he would resolve the decades-old nuclear dispute with the West through enlightened negotiations and thus lift the crippling sanctions that have brought so much hardship to bear on ordinary Iranians. Rouhani's appointment of the US-educated Zarif as foreign minister was supposed to be the embodiment of this policy of reasoned engagement.

So, the Iranian government needs to show its diplomatic gambit worked first and foremost by being able to declare that the end of the gruelling economic and financial sanctions is nigh. On the other hand, the moderate Rouhani diplomatic team need to placate more hardline political elements within Iran who insist that the country's right to all aspects of nuclear technology is inviolate.

However, a closer look at the details of the so-called framework accord to emerge from Lausanne shows that Iran falls short on both counts of sanctions removal and nuclear rights.

Zarif is certainly correct that no Iranian nuclear facilities will be closed. But the new restrictions outlined in this week's Joint Statement mark a dramatic curtailment that goes well beyond what Iran had previously declared were red lines.

Enrichment of Uranium nuclear fuel will be limited at the designated low five per cent level for the next 10-15 years and will only be permitted at just one of Iran's several nuclear sites — at Natanz. Other nuclear sites at Fordow and Arak will cease enrichment activities and will be converted into research facilities under international cooperation.

Iran will be compelled to reduce its number of centrifuges required for enrichment by two-thirds of the existing numbers and its stockpile of already-enriched Uranium will be cut from 10,000 kg to 300 kg.

Skeptics may say that if Iran is genuinely pursuing peaceful applications of nuclear technology then these restrictions are not onerous. But the cessation of uranium enrichment and the curtailment of infrastructure is a grave infringement on the legitimate rights of Iran as a signatory to the Non-Proliferation Treaty. No other signatory to the NPT is obliged to conform to such unprecedented restrictions.

On the issue of sanctions, again, Iranian declarations of success from Lausanne also seem premature. The wording of the Joint Statement talks about the US, European Union and United Nations ending nuclear-related economic and financial sanctions "simultaneously with the IAEA-verified implementation by Iran of its key nuclear commitments."

The International Atomic Energy Agency (IAEA), the UN nuclear watchdog, thus holds the key as to when Iran will be deemed clear for sanctions relief. If the IAEA reports that Iran has not removed the requisite quantity of low-enriched uranium, centrifuges or converted its designated nuclear facilities to international research applications — all this within three months — then the clear implication is that Iran will not be entitled to sanctions relief.

In the past, the IAEA has shown itself to be infiltrated by Western and Israeli intelligence by publishing reports that have undermined, somewhat scurrilously, Iranian claims of peaceful nuclear ambitions.

Days before the latest round of talks opened in Lausanne, the IAEA issued an assessment which claimed that Iran had not fully cooperated with inspections to verify non-military applications of all its nuclear sites.

Mideast Markets Rally as Investors Welcome Iranian ‘Nuclear Deal'
It is thus not hard to imagine how the Western-dominated IAEA could very well write unhelpful reports over the next three months — and indeed years — implying that Iran is not meeting its "international obligations" under the Joint Statement. That will in turn postpone the signing of a final nuclear deal and result in the continuation of Western sanctions.

Within hours of the joint statement being heralded at Lausanne, Washington and its allies began shifting their interpretations — much to the chagrin of Iran's Zarif.

French Foreign Minister Laurent Fabius — who in the past has shown a flare for sabotaging delicate P5+1 talks — described the Joint Statement as a "positive development". But, he added with a mischievous overtone, "serious questions remain". That is code for more backsliding and prevarication.

President Obama gloated over the "most intrusive inspection regime in history" being imposed on Iran, and he explicitly said that the lifting of sanctions would be "phased in" over the lifetime of any agreement, which could mean up to 15 years from the signing of a final accord in three months times.

Therefore, contrary to what Iran's top diplomat Mohammad Zarif is saying, it is far from clear that all sanctions against his country will be annulled immediately in the coming months.

Iran might then find itself in an invidious position whereby it has made strategic concessions on its nuclear rights only to be placed under further duress from the vicissitudes of Western blockade on its economy and development.

The devil is not so much in the detail of the so-called nuclear negotiations. The devil is in Western politicised interpretation. That inscrutable quality makes for mercurial and untrustworthy "partners".