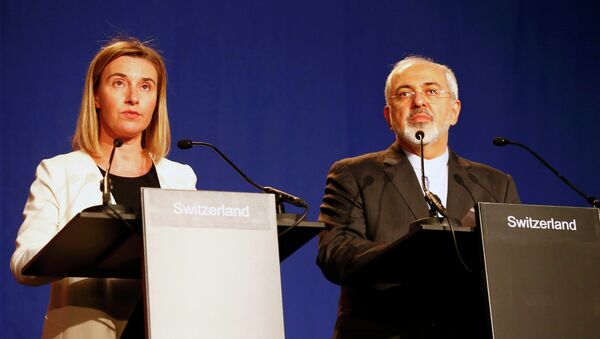 Agreements on Iranian nuclear program reached in Lausanne, Switzerland will be endorsed in the new UN Security Council resolution, according to a joint statement issued following the P5+1 talks with Tehran.

Earlier on Thursday, US Secretary of State John Kerry and Iranian President Hassan Rouhani both confirmed via respective tweets that negotiators agreed parameters to resolve the issue.

The latest round of negotiations between Iran and the P5+1 group, comprising Russia, the United States, the United Kingdom, China, France and Germany, was expected to end on Tuesday.

Breakthrough Deal Reached at Iran Nuclear Talks in Lausanne
The delegations prolonged the talks to work out a framework deal, set to pave the way for a comprehensive agreement that should be reached by July.

The West, fearing that Iran could be developing nuclear weapons under the guise of a civilian nuclear energy program, wants Tehran to halt uranium enrichment and decrease the number of centrifuges in the country.

Tehran, in turn, wants Western sanctions imposed against Iran over its nuclear activities to be fully lifted as part of the deal with the P5+1.