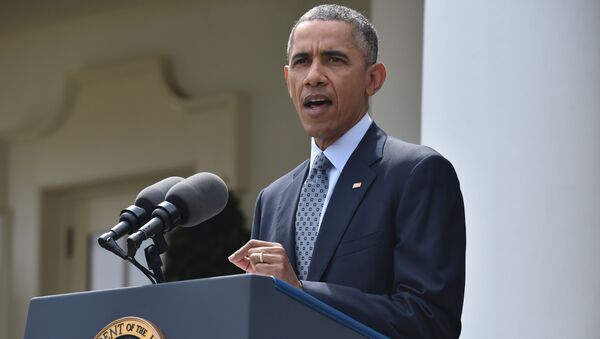 US President Barack Obama said Thursday following a decision of the P5+1 and Iran on the framework of the future nuclear agreement after many months of talks that a "historic deal" had been reached with Tehran.

US President Barack Obama said that if the Iranian nuclear deal was implemented, it would prevent Tehran from obtaining a nuclear weapon.

"Iran will never be permitted to develop a nuclear weapon," Obama said.

"The issues at stake are bigger than politics. These are matters of war and peace" —President Obama to Congress #IranDeal

Breakthrough Deal Reached at Iran Nuclear Talks in Lausanne
The long-awaited interim solution on Iran's nuclear program was reached earlier on Thursday at the latest round of talks in the Swiss city of Lausanne.

The US president said that the reached deal was an opportunity for Iran to prove that its nuclear program was peaceful.

"If Iran shifts, we will know it. If we suspect anything, we will inspect it," US President Obama said.

He added that other US sanctions against Iran that were not related to its nuclear program would remain.

"In return for Iran’s actions, the international community has agreed to provide Iran with relief from certain sanctions" —Obama #IranDeal

The deadline for a comprehensive agreement has been set for July 1, 2015.

The US president, however, emphasized that the final agreement had not been signed yet.

Obama said that the reached agreement on Iranian nuclear program had prevented a new war in the Middle East adding that the approach of Washington and Tel Aviv on the the Islamic Republic's nuclear issue differ.

"If… Netanyahu is looking for the most effective way to ensure Iran doesn’t get a nuclear weapon, this is the best option," he said.

"If…Netanyahu is looking for the most effective way to ensure Iran doesn’t get a nuclear weapon, this is the best option" —Obama #IranDeal

"I will be speaking with Prime Minister [Netanyahu] today to make clear that there is no daylight, there will be no daylight when it comes to our support for Israel security, and our concerns about Iran’s destabilizing policies and threats towards Israel," Obama said.

The agreement has "made the world safer," he said.

The P5+1 group comprising Russia, the United States, France, China, the United Kingdom and Germany have been trying to reach a deal with Iran that would ensure the peaceful nature of Tehran's nuclear energy program since 2013.