Israel to Suffer Serious Civilian Losses in Next War With Hezbollah 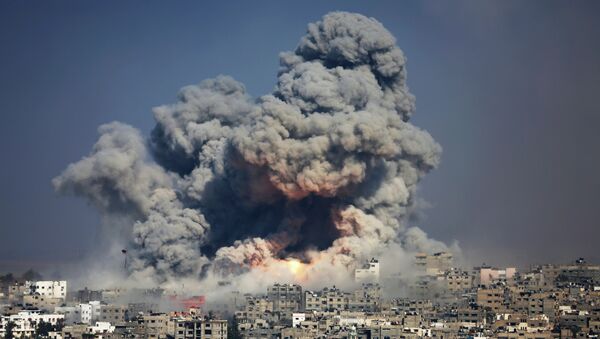 © AP Photo / Hatem Moussa
Subscribe
Amid recent flare-ups, a new report by the Israeli military suggests that the Syrian Civil War has made Hezbollah stronger, and another all-out conflict between the two could result in the deaths of hundreds of Israeli citizens.

The 34-day Lebanon war in 2006 saw heavy casualties on both sides. In addition to significant damage to infrastructure, 1,200 people in Lebanon were estimated to have been killed, most of them civilians, and most by Israeli rocket fire. Though Israel, in contrast, lost 160, and the majority of those deaths were Israeli troops fighting inside Lebanon.

But a new military assessment suggests that if a similar conflict were to erupt today, Israel would suffer significantly more civilian deaths, as well as heavy damage to infrastructure.

Netanyahu Vows to Continue Preemptive Action Against Attacks on Israel

The report attributes this, in part, to the chaos in neighboring Syria, where Hezbollah has gained experience while fighting with Damascus. According to the assessment, a new conflict could see Israel being hit by 1,000 to 1,500 rockets per day. These attacks would kill hundreds and could cripple critical infrastructure, like power stations and airports.

The report could be employed as an argument for stronger investments in Israel’s defensive systems, arguments that have been made both domestically and abroad.

"[We] requested $41.4 million in funding for the Iron Dome anti-rocket defense system, $286.9 million for the David’s Sling Weapon System, and $146.9 million for the Arrow Weapon System," a statement on Roskam’s website read. This followed a direct request from Israel which bypassed the White House and went straight to Congress, just as Prime Minister Netanyahu’s controversial speech in early March.

Netanyahu, having just won an election by appealing to the hard right, has repeatedly promised to thwart any attacks on its soil.

"We have proven that nobody is immune from our intention to foil attacks against us. Thus we have acted and thus we will continue to act," Netanyahu said, according to the Times of Israel. This speech followed a January missile attack in the Golan Heights which killed six Hezbollah fighters, as well as Iranian Brig. Gen. Mohammed Allahbadi.

Speaking through the United Nations Interim Force in Lebanon in February, shortly after the attack, Hezbollah informed Israel that it wasn’t interested in escalating hostilities, though both sides have made statements that a new conflict would result in heavier casualties than the previous.