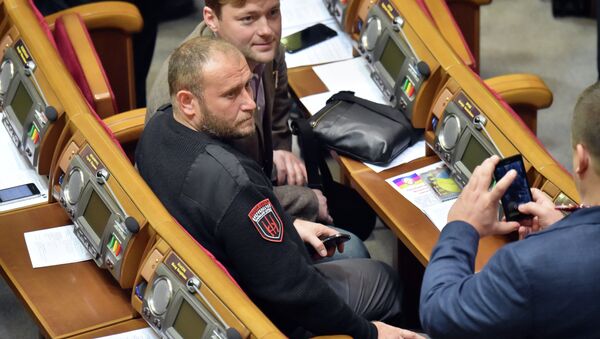 Dmitri Yarosh, Rada MP and leader of Ukraine's Right Sector, has declared that the unruly residents of eastern Ukraine must be deported and deprived of their civil rights before a program of 'affectionate Ukrainianization' can begin.

Donbas Battalion Commander Expects Trouble in Odessa During May Holidays
In an interview for Ukrainian newspaper Obosrevatel published on Sunday, Ukrainian Right Sector leader and Rada deputy Dmitri Yarosh stated that the unruly residents of eastern Ukraine should be deported and deprived of their civil rights.

Yarosh noted that much of Donbas is populated by 'Sovoks', an insulting slang term in Ukrainian and Russian derived from the word 'Soviet'. Yarosh stated that the region "is populated by Sovoks –real Sovoks. And they should be deported. We have to deal with those who do not want to live by the rules and the laws of the state in a very harsh manner. This includes deportation, the deprivation of civil rights, and so on. Without force, it will not be possible to do anything with the region, to turn the tide so to speak."

The Right Sector leader added that the region's "unruly" residents must also be dealt with. "If we get rid of the unruly ones, everything will be fine, quiet and peaceful. And then, of course, a program of affectionate Ukrainianization can begin." The MP noted that "spiritual rebirth" can begin only if authorities act in a consistent and forceful manner.

Yarosh cited Ukrainian authorities' response to events in Konstantinovka, Donetsk, controlled by the Ukrainian military, where an inebriated Ukrainian armored vehicle driver recently crashed into a crowd of people and crushed and killed an eight-year-old girl in a hit and run incident, leading to riots in the streets.

"The events in Konstantinovka are an example of what I mean. If we had shown even a little bit of weakness…Right from the beginning a whole bunch of 'heroes' began crawling out of the woodwork, using the tragedy in their own separatist interests. And when our guys came out and began shooting into the air and arresting the instigators of riots, everything ceased at once. This is the rule," Yarosh explained.

The MP noted that in his view, there are still many "real patriots" of Ukraine in the region, and that the present anti-Kiev attitudes are the result of many years of Russian propaganda and the removal of genuinely Ukrainian spiritual values. Yarosh explained that the "guys from Donetsk and Lugansk regions" fighting for the Ukrainian army "should become the [new] elite, on whose basis a qualitatively new society can be built…And those Vatnik [slang for Russians blindly loving their country], criminal oligarchic attitudes sitting in the minds of ordinary people for one reason or another must be removed."

Right Sector Insignificant? President Offers Neo-Nazi Defense Ministry Post
The extreme nationalist leader noted that he has accepted the president's invitation to come work in the Ukrainian Ministry of Defense, adding that he has chosen to do so on a volunteer basis.

Speaking about the Ukrainian army's recent losses on the battlefield, Yarosh recalled that "we faced a route near Ilovaisk…On the one hand, we have learned to fight, with morale at a high level. But things are very bad when a pride of lions is led by sheep. They cannot lead us to victory, and only roll us back…Speaking about the current situation on the front, our forces are still threatened by several encirclements. And I don't know, again, whether the sheep will react to this, or whether they are playing some sort of geopolitical game."

The Right Sector is a far-right wing Ukrainian nationalist party. In January and February of 2014, the movement's members participated heavily in fighting with Ukrainian police in the streets of Kiev, and in the capture of government buildings during the Euro-Maidan coup. Since April, they have taken the lead in the crushing of protest movements in eastern Ukraine, and enforcing the new order of the revolutionary government. In addition, they have also been involved in Kiev's military operation in Donbas. Right Sector's Ukrainian Volunteer Corps includes two battalions operating in eastern Ukraine, as well as eight reserve battalions throughout the rest of the country.

In November 2014, the Russian Supreme Court declared the Right Sector to be an extremist organization, and its activity has been banned on the territory of the Russian Federation. Earlier, in March, 2014, Russian authorities issued an arrest warrant against Dmitri Yarosh for incitement of terrorism, and for his organization's combat operations in the First Chechen War against the Russian military.