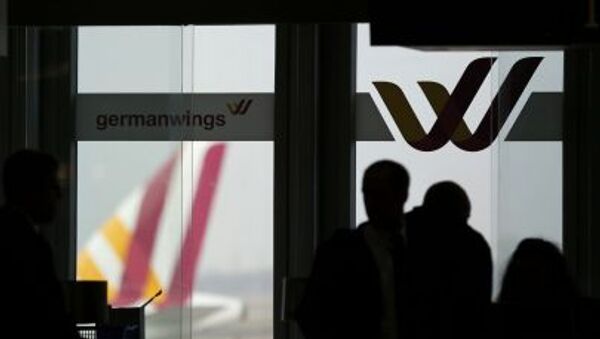 © REUTERS / INA FASSBENDER
Subscribe
Ekaterina Blinova
All materialsWrite to the author
Discussing the A320 plane tragedy, a French journalist points to the fact it is not the first time in history when a pilot has "intentionally" destroyed an aircraft.

A320 Crash: 'Pilots Are Good Actors, Can Hide True Emotional State'
Discussing the A320 co-pilot's inexplicable decision to steer the plane into a mountain, French journalist Jean-Marie Pottier points out that it is far from the first time that a pilot has "voluntarily" destroyed their aircraft.

The A320 Airbus crashed in in the French Alps Tuesday after the co-pilot of the Germanwings flight, Andreas Lubitz, refused to unlock the reinforced cockpit door to his colleague and most likely voluntarily steered the plane into a mountain. Brice Robin, the Marseille public prosecutor, confirmed that it was not an accident, referring to audio recordings from the plane's first black box. The crash resulted in the deaths of 150 people, including six crew and 144 passengers.

Although Andreas Lubitz's motivation still remains unclear, French journalist Jean-Marie Pottier points out that it is not the first time when a plane has crashed due to the strange behavior of its pilots. He cites at least ten air tragedies linked to the apparent desire of a pilot to destroy the aircraft. While some experts label such a behavior as "murder-suicide," the real motivational drivers are often shrouded in mystery.

Co-Pilot of Crashed Germanwings Plane Hid Illness From Employer
The most vivid example is the tragedy of October 31, 1999, when EgyptAir Flight 990 crashed into the Atlantic Ocean, 60 miles south of Nantucket Island, Massachusetts, killing 217 people. The investigation revealed that the captain turned off the autopilot and left the cabin just before the crash. Remarkably, before leaving the cockpit the pilot repeated several times "I rely on God." It is worth mentioning that the tragedy claimed the lives of 100 US citizens and seriously aggravated tensions between Washington and Cairo.

The catastrophe of the SilkAir Flight 185 heading to Singapore from Jakarta, Indonesia, was also surrounded by sinister events. The aircraft crashed in southern Sumatra on 19 December 1997, killing 97 passengers and seven crew members on board. The United States' National Transportation Safety Board (NTSB) came to the conclusion that the tragedy was caused by deliberate flight control inputs, made most likely by the airplane's captain. However, Indonesia's NTSB dismissed these allegations, citing lack of evidence.

Police Deny Reports of Finding Germanwings Co-Pilot Suicide Evidence
In 1982, a Japan Air Lines flight's captain deliberately put the jet engines into reverse thrust, while heading to Tokyo's Haneda airport. The captain's irrational behavior led to a catastrophe, which left 24 people killed and 95 injured. The investigation disclosed that the pilot had been mentally unstable and had complained of hallucinations since 1976.

The latest case of this kind occurred in November 2013. The LAM Mozambique Airlines Flight 470 crashed in northern Namibia, killing 33 passengers and crew. A preliminary investigation into the case indicated that the pilot voluntarily destroyed the aircraft. According to detectives, he initiated the descent of the plane after his co-pilot left the cockpit. The situation closely resembles what happened to the notorious Germanwings Flight 9525, when Andreas Lubitz locked the captain out of the cabin and most likely intentionally brought the aircraft down.

It is worth mentioning that after the A320 Airbus crash the European Aviation Safety Agency (EASA) announced it would stipulate the presence of no less than two crew members in a plane’s cockpit at all times during a flight. However, the question concerning the motivational drivers of those pilots who deliberately destroyed their planes remains unanswered.