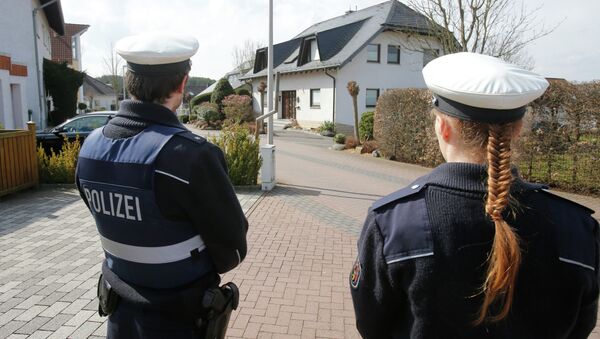 © AP Photo
Subscribe
Spokesman for the investigative team of Germanwings Airbus crash stated that information about written evidence being found during searches, published by British tabloids, is not true.

Police Claim to Find 'Significant Clue' at Home of Alps Plane Crash Suspect
BERLIN (Sputnik) — German police rejected media claims on Friday that they had found evidence proving that the co-pilot of the crashed Germanwings plane had planned his suicide.

"Information about written evidence being found during searches, published today by British tabloids, is not true," a spokesman for the investigative team told reporters.

The spokesman added that the police had gathered evidence in the home of the co-pilot, which will be further investigated, though refrained from providing further details.

First Data From Crashed Germanwings Plane Could Be Extracted Wednesday
The Airbus A320 of Lufthansa's low-cost airline Germanwings crashed in the French Alps on Tuesday. There were 150 people on board the plane, including 6 crew and 144 passengers. There are no survivors.

On Thursday, a French prosecutor asserted that according to data from the aircraft's first black box, the captain left the cockpit to visit the toilet, and the co-pilot then locked the captain out.

The co-pilot is said to have showed no signs of panic and is deemed to have been conscious while he was alone in the cockpit. The prosecutor said that the passengers were unaware of the situation on board until the very last minute.

Lufthansa CEO Carsten Spohr said later on Thursday the company believed the plane crash was deliberate. He added that Germanwings pilots did not undergo regular psychological evaluations and only took a psychological test during training.