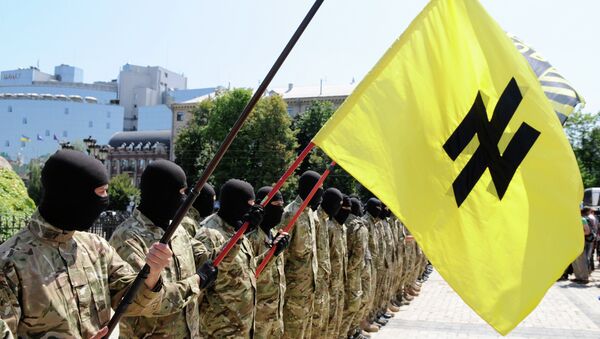 © Sputnik / Alexander Maksimenko
/
Go to the photo bank
Subscribe
Ukrainian President Poroshenko said that no governor in the country would be allowed to have own army.

Kiev's Sopranos: Oligarchs at War Over Control of Major Oil Company
President Petro Poroshenko said that no Ukrainian governor would have own "pocket armed forces."

"Territorial defense will be subject to clear military vertical structure; there won't be any governor with pocket armed forces," Poroshenko said.

Earlier Monday it was reported that two battalions of the Ukrainian National Guard had been sent to Dnepropetrovsk by Petro Poroshenko’s decree to "maintain public security."

Relations between Poroshenko and Kolomoiskyi deteriorated last week, when the Dnepropetrovsk governor broke into the headquarters of the country’s oil transportation operations company Ukrtransnafta, outraged with a change in management. The Ukrainian parliament has since demanded Kolomoiskyi's resignation, and Petro Poroshenko reprimanded him on Saturday for "a breach of professional ethics."

Poroshenko Sends Two Army Battalions to Dnepropetrovsk
Kolomoiskyi reportedly funds a number of Ukrainian volunteer battalions that have committed human rights violations in the southeast of the country, where they have been fighting against independence supporters alongside Kiev forces.