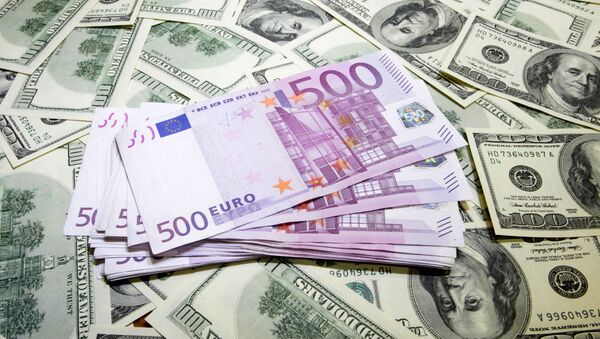 © Sputnik
/
Go to the photo bank
Subscribe
The European currency is steadily declining against the dollar, fueling international concerns of possible spillover effects of the ongoing readjustment in global economy.

Global Stocks Set to Advance in a Stronger Dollar Environment
Kristian Rouz – As the world’s leading economies, save for the US, are struggling for international competitiveness via the ongoing so-called ‘currency war,’ one of the world’s leading reserve currencies, the euro, is depreciating at a steady pace. As a result of the $1.1 trnl bond-buying program launched by the European Central Bank early this March, the devaluation of the euro provides for old Europe to re-emerge as the world’s leading exporter of goods and services, as well as a source of investment capital. Led by Germany, the Eurozone is entering the era of industrial renaissance, becoming a dangerous rival for other export-oriented nations like Japan, mainland China, select developing economies, and, to a lesser extent, the US.

The euro is now trading at $1.05, at its 12-year low, having declined from its strongest at $1.38 only a year ago as a result of conscious monetary efforts and a complex readjustment of the Eurozone’s economic model. The latter is happening as a consequence of a complex economic challenge brought about by the global economic turmoil of several recent years. The global economic crisis hit the Eurozone in 2008, and the debt crisis in some of the Eurozone member states unraveled in 2011-2012, resulting in a significant economic slowdown across the troubled continent. The two main risks that made Europe vulnerable before the crisis were an excessive reliance on importsand poor common monetary policy.

Eurozone’s Economic Future Uncertain Amid Greek Crisis, Euro Fall
The lessons of the two crises were well learned, as Europe-based multinational enterprises have mostly been returning their manufacturing facilities back since early 2010, when the euro area posted a historical record in a year-on-year industrial growth, hitting 10 percent. The higher industrial growth resulted in a dramatic change in the Eurozone’s balance of trade, becoming positive in early 2012. The euro area posted a record trade surplus in Q1 2012 of 14 bln euros, and the figure has increased ever since, now standing at 25 bln euros.

These developments provided a natural solution to another long-lasting Eurozone’s internal misconception. Historically, Northern Europe, Germany in particular, pushed for tighter monetary conditions, a stronger euro, less accessible credit and more fiscal discipline, while many nations of the Southern Europe were desperate for lower interest rates, a weaker common currency and looser monetary environment as their economies were driven mostly by inflation and excessive borrowing. However, after the Eurozone became a large exporter in the recent years, most of its industrial producers, mainly the German ones, have lobbyied for looser monetary conditions and a cheaper euro to boost their international competitiveness. Coinciding with the borrowing aspirations of the crisis-ravaged Southern Europe, these tendencies green-lit the large-scale quantitative easing to be implemented by the ECB, which occurred earlier this month.

Global Stocks Retreat Fearing a Stronger Dollar
Now, why the euro is falling against the US dollar? We have seen quite opposite dynamics as far as in 2007, when the euro hit its record high at $1.59 USD. Back in the day, the Eurozone’s economy was capitalizing on territorial expansion and a strengthening of the internal economic ties between member-states, while the then-import-dependent US, already hit by the mortgage collapse, was moving towards looser monetary conditions. This time around, the Fed is tightening up credit and preparing for a hike in interest rates, while the ECB is buying bonds with freshly printed euros.

Europe is also experiencing a significant capital flight, something incredible only couple of years ago. Today, a German 10-year governmental bond pays 0.25 percent, while a US Treasury pays 2.1 percent. Higher yields, nonetheless, mean higher risk, but international finance is a risky business, and investors are buying dollar-denominated assets, selling off  euros.

Deutsche Bank Says Euro Will Nosedive by 2017
That said, the US dollar is becoming more of a ‘safe haven’ for investment than an actual currency. Obviously, a stronger dollar hurts American exporters and export-oriented manufacturers, while significantly benefitting US consumers.

Another reason for the dramatically weakening euro is a difference in approach towards monetary policy between the US and the Eurozone. In America, the economy has expanded at a sustainable pace of an average of 2.3 percent over the past four years, while unemployment is at 5.5 percent, suggesting the Fed interest rate hike might come soon in order to fend off possible overheating in certain sectors, with inflation being a minor issue. In the Eurozone, unemployment remains at over 11 percent and has hardly decreased, while economic growth is barely above zero and deflation is close. The American economy is stronger than the Eurozone’s, reflected by their respective currencies’ FX rates.

The euro could gain parity the dollar in 2016, most analysts suggested, but in fact this could  happen before this year’s end. All depends on whether the US Fed will increase rates, and the scale of the hike, if it is to happen, and also on how long the ECB’s bond-buying will be intact. At this point, inflation in the US is decelerating, suggesting the Fed is not very likely to hike rates. But, as America has achieved ‘normalcy’ in employment, it might want to fight the ‘stickiness’ in prices and real wages, suggesting demand-side economics with more fiscal discipline, less borrowing and more ‘real’ growth – much reminiscent of what Germany was doing before the 2008 crisis.
In Europe, inflation is still sluggish. Besides, Eurozone’s multinationals might want to conquer a larger share of the global consumer market. For these two reasons, the ECB’s bond-buying is likely to stay in place for several years. According to estimates by Deutsche Bank, the euro will dip to $0.90 by late 2016 and to $0.85 by late 2017. Nonetheless, the euro-dollar parity might be reached in 2015 already.

Will a Stronger Dollar Benefit the US?
For international trade, a weaker euro means significant structural readjustment. The Eurozone will export more automobiles (a challenge to Japan), steel (a challenge to Russia and Ukraine), power (commodities exporters at risk), chemicals (a threat to mainland China and the US). Another minor effect is that a weaker euro will eventually attract more tourists and students in Europe.

For global finance, the change is going to be even more fundamental. While the European equities will rally boisterously, the US-bound capital flight from Europe will be ever-increasing. The resulting situation might trigger a hazardous overheating of the US financial sector, pushing it towards an edge of a crash similar to the ‘dotcom’ panic of 2000. The dollar will skyrocket on the abundance of money. The US will become a final destination of the globally-generated money liquidity, while America’s ability to export goods or services will be significantly impaired. The dollar-denominated international trade will eventually become too expensive for the Third world, and the weak euro might well replace the dollar as a more common monetary equivalent. As America’s economic isolationism will grow, the Eurozone and Japan will boost their industrial capacity, and this is the point where the Trans-Pacific Partnership initiative and the Transatlantic Trade and Investment deal will come in handy.

The rest of the world’s nations, exempt from the ongoing process of consolidation in the leading economies, will suffer greatly, as the dollar-denominated commodity prices are doomed to fall further, while competing against the Eurozone and Japan in industrial exports is a recipe for disaster.