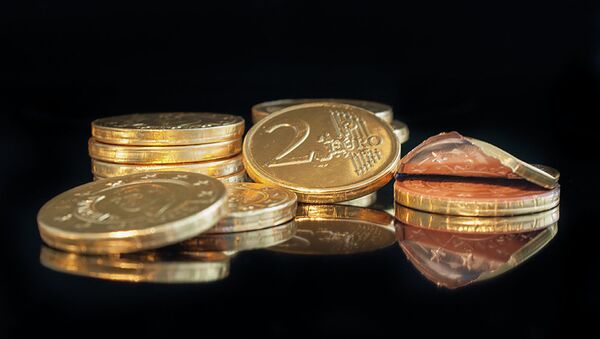 © Flickr / Ana
Subscribe
Deutsche Bank has predicted that the euro may plunge to parity with the dollar by the end of this year, and forewarns that the single currency may plummet to just 85 cents per USD by 2017.

Ireland Developed Plan in Case of Euro Collapse in 2011
The euro has dropped decisively, and may reach parity with the dollar by the end of this year. The single currency could nosedive to just 85 cents per US dollar by 2017, Deutsche Bank analyst George Saravelos said.

The forecast comes after Deutsche Bank, the world's second-largest currency trader, predicted the euro's devaluation, saying that it does not rule out a huge outflow of investment from Europe within the next two years.

In his latest prediction, Saravelos said that the age of the so-called Euroglut has progressed faster than he expected.

Under a Euroglut scenario, European savings and the money brought by Germany's large trade surplus accumulate and get exchanged for higher-yielding currencies.

"European outflows have been even bigger than our initial expectations over the last six months. We now foresee a move down (for the euro) to 1.00 dollar by the end of the year and a new cycle low of 85 cents by 2017," Saravelos said.

Global Stocks Retreat Fearing a Stronger Dollar
According to a previous forecast by Deutsche Bank, the euro was due to fall to parity with the dollar by the end of next year, with the European currency expected to drop to 95 cents by 2017.

The BBC cites analysts as saying that parity could come within several months, pointing at the likelihood of a US Federal Reserve rate hike and the unprecedentedly low yields of German debt.

According to the BBC, a two-year German government bond has a yield of —0.2%, meaning that an investor who buys such a bond today and holds it to maturity will actually lose 0.2% per year, making the space under his mattress a better investment.

Deflation, the opposite of inflation, is toxic for national economies, as consumers put off spending indefinitely amid shrinking prices and investors choose higher returns abroad over meager or even, in Germany's case, negative returns at home.