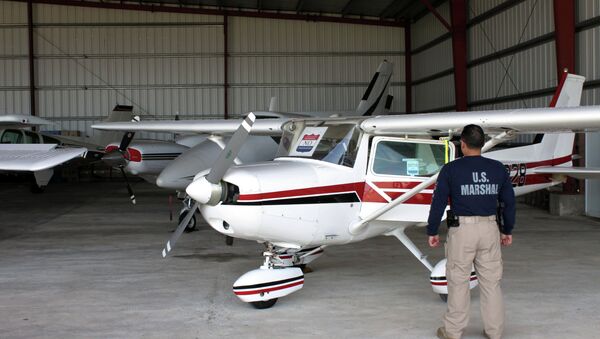 © Flickr / U.S. Marshals
Subscribe
The Central Intelligence Agency was instrumental in the development of "dirtbox" technology - which was then implemented by the Department of Justice - in which planes that imitate cell phone towers can scan the mobile communications of potentially thousands of Americans at once.

The technology first made headlines in November when a Wall Street Journal report detailed how Cessna planes were used by domestic law enforcement to track cell phone signals from the air by fooling any phone in the area into thinking the device — or "dirtbox" — on the plane was a cell phone tower, and trick it into handing over its registration information. Much like a "stingray" device on the ground, the device could then change locations, measure cell signal strength for a targeted cell number and determine the location of a given phone very precisely.

The new Journal report, citing sources familiar with the program, details how the technology used to hunt terror suspects overseas was part of a collaboration between foreign intelligence and domestic law enforcement that also used that same technology to hunt criminal suspects within the United States.

The sharing of strategies and technologies demonstrates the influence of intelligence agencies and the military on domestic law enforcement practices since the Sept. 11, 2001 attacks.

The planes used by the US Marshals Service — under the Department of Justice — fly from five cities with a flight range covering nearly the entire US.

The aspect of the technology which most troubles civil liberties advocates that it uses a dragnet approach to collection — picking up not just a suspect's cell phone, but the information of potentially thousands of unrelated cell phone users in the same area. The devices can not only identify a cell signal but can, with a court order, intercept a phone's communications.

The collaboration between the CIA and the Justice Department — which both agencies say violated no laws about each agency's purview — began ten years ago, when the US Marshals Service received $1 million in gear to begin implementing this type of cell phone surveillance.

Then the Marshals’ Technical Operations Group developed it over the course of subsequent years in collaboration with the CIA’s Office of Technical Collection with the CIA initially footing most of the bill. Over $100 million went into the research and development of the program, according to the Journal's sources.

The device is variously referred to as a "stingray" or a "dirtbox" — a name which derives from the Boeing subsidiary manufacturing the device called  DRT — Digital Recovery Technology Inc.

Use of "Dirtboxes" Shrouded in Secrecy

The Marshals have not confirmed or denied the use of the planes but insisted that their investigative techniques were deployed “only in furtherance of ordinary law-enforcement operations, such as the apprehension of wanted individuals, and not to conduct domestic surveillance or intelligence gathering,’’ an official told the Journal in November 2014.

But so far little is known about the details of how this technology is implemented, what measures are in place to protect innocent bystanders or how data is stored or discarded.

“There’s a lot of privacy concerns in something this widespread, and those concerns only increase if we have an intelligence agency coordinating with them,’’ Andrew Crocker of the Electronic Frontier Foundation told the Journal.

The EFF filed a FOIA lawsuit in February to obtain more information about the program because, they say, the Justice Department has been so secretive about the use of the technology and has failed to respond to their FOIA request filed after the story broke in 2014.

"Across the country, the Justice Department has intervened in local public records battles to prevent the release of information about these technologies, employing tactics such as signing nondisclosure agreements with state and local law enforcement agencies, seizing records held by those agencies, and withholding key pieces of information about the technology from judges and criminal defendants," a statement on the EFF website reads.

Lawmakers were also alarmed at the revelations about the airborne spy devices and several  senators have repeatedly written to US Attorney General Eric Holder, insisting on congressional oversight of the use of this kind of technology and demanding answers to their questions, such as "What statutory authority permits the use of this surveillance technology?"  or "What are these agencies’ policies on the retention and destruction of the information that is collected by cell-site simulators?" The Senate Judiciary Committee will report on its finding on the matter later in the year.

Members of Congress reiterated their concerns when a new FBI policy recently outlined exceptions under which they did not need to seek a warrant to use this technology, including  "cases in which the technology is used in public places or other locations at which the FBI deems there is no reasonable expectation of privacy."

This stipulation raised concerns that the phone dragnet technology could be used to amass phone data of people at any large public gathering, such as a political protest or religious service.