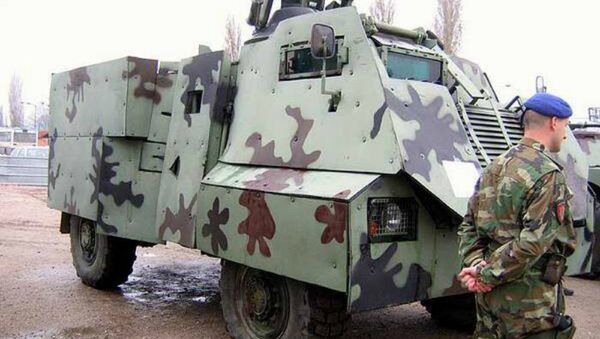 © Flickr / K. Aksoy
Subscribe
The purchase of a group of antiquated AT105 Saxon armored personnel carriers from the United Kingdom was hailed by Ukrainian leadership as a major boost to the country's military. But instead of protecting the lives of Ukrainian soldiers, it led to a deadly incident even before the vehicles were delivered to military bases.

Ukraine Military Gets Boost With UK Armored Vehicles Delivery
Ukraine bought 75 Saxons from a British company, reportedly paying $50,000 per vehicle — a move that raised the eyebrows of military experts. British general Sir Richard Dannatt, who served as UK's Chief of the General Staff between 2006 and 2009, called the vehicles "quite useless." Others were less polite: Thomas Newdick in the popular blog "War is Boring" brought up memories of soldiers who rode in the APC, calling the vehicle an "armored bread van" and underscoring that the Saxon is extremely vulnerable in modern combat.

Nevertheless the first 20 Saxons arrived in Ukraine last month. And on Tuesday, an accident involving two of the APCs on the way from Kiev to the town of Berezan in the Kiev region resulted in the death of a Ukrainian soldier.

According to preliminary reports and eyewitness accounts, two APCs connected by a rigid tow hitch jackknifed, sending the leading vehicle to the left and the towed APC to the right, where it flipped and fell into a ditch.  The driver of the leading APC, who reports say lost control of his vehicle, was killed.  It is not known whether there was a driver or passengers in the towed APC.

The two Saxons were part of an 8-vehicle transport operation along the Kiev-Kharkov highway. Law enforcement and officials from the military prosecutor’s office were on the scene and an investigation into the incident has been launched.

But there's little hope that the tragic incident will stop Ukrainian authorities from using the APCs that were scrapped by the British military years ago. After the cash-strapped country's leadership paid millions of dollars for the archaic vehicles and presented them as potential saviors for the Ukrainian military, it would be politically inconceivable to admit that the Saxons did more to put soldiers’ lives in danger than it did to protect them.