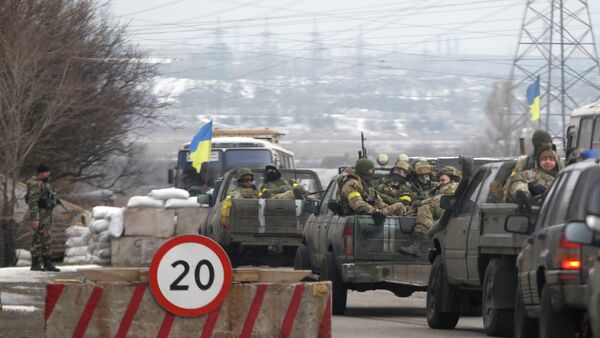 Donetsk People's Republic's forces do not respond to Kiev "provocations" and have not carried out any offinsives on the eastern Ukrainian city of Mariupol, the deputy commander of the DPR forces said.

OSCE to Monitor Ukraine Ceasefire in Debaltseve, Mariupol, Donetsk Airport
DONETSK (Sputnik) — Eastern Ukrainian forces will not carry out any military offensives against the city of Mariupol, the deputy commander of the self-proclaimed Donetsk People’s Republic’s (DPR) forces said Thursday.

“Our units in the Donetsk and Mariupol directions do not respond to provocations and have not conducted any offensive actions,” Eduard Basurin told reporters.

On Wednesday, Ukrainian military spokesman Andriy Lysenko claimed the Mariupol Shipyard, along with local coal and iron and steel plants, have been shut down due to shelling.

Basurin, in turn, noted "disturbing" shelling in villages across the region over the past 24 hours.

Donetsk Observes Ceasefire, Does Not Respond to Kiev 'Provocations'
Despite sporadic violence in Ukraine's southeast, an all-out ceasefire that came in force February 15 is generally observed, according to the Organization for Security and Co-operation in Europe (OSCE).

Along with the ceasefire, a deal was struck in the Belarusian capital Minsk last week, including the 14-day pullout of heavy weaponry into a wider security zone and an all-for-all prisoner exchange.

The armed conflict has killed around 5,600 civilians since the Ukrainian government launched a large-scale military operation in the southeast last April.