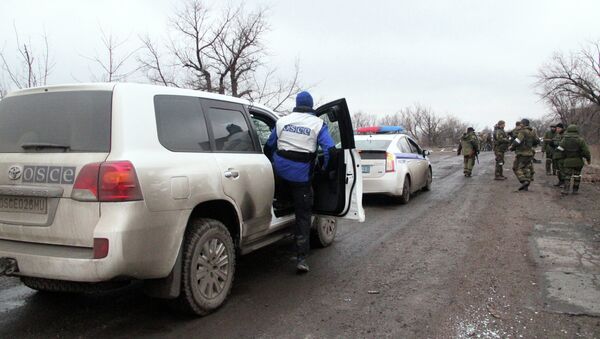 350 representatives of the Organization for Security and Co-operation in Europe (OSCE) will monitor the ceasefire in critical points - Debaltseve, Mariupol and the Donetsk Airport, according to the statement of Russia's envoy to the OSCE Andrei Kelin.

OSCE Barred From Debaltseve in Breach of Minsk Agreements – Ukrainian FM
MOSCOW, (Sputnik) — The Organization for Security and Co-operation in Europe (OSCE) has reinforced its mission in eastern Ukraine to monitor the ceasefire in the conflict's flashpoints, including Debaltseve, Mariupol and the Donetsk Airport, Russia's envoy to the OSCE told RIA Novosti Sunday.

"OSCE has been monitoring the ceasefire since Sunday night. Extra monitors have been introduced, there were 238 of them; by Sunday morning their number was increased to 350. They are split into groups, they defined locations for control, including critical points – Debaltseve, Mariupol and the Donetsk Airport," Andrei Kelin said.

Clashes in eastern Ukraine have intensified in early 2015. The airport of Donetsk has been almost destroyed in intense fighting. Some 10,000 Ukrainian troops remain surrounded by independence militia after attempting to recapture the contested town of Debaltseve.

Ukraine's Donbas Ceasefire Generally Respected
The shelling of the port city of Mariupol, located outside the militia-controlled territory, killed dozens of civilians in January.

The truce regime is not stable yet after the first night, and both sides are making "poignant statements," Kelin said. The diplomat stressed that the sides need to concentrate on adhering to the ceasefire regime and expressed hope that there would be no relapses.

The ceasefire, which took force on Sunday midnight, was agreed on by the leaders of Russia, Ukraine, France and Germany on February 12, during the talks in Minsk.