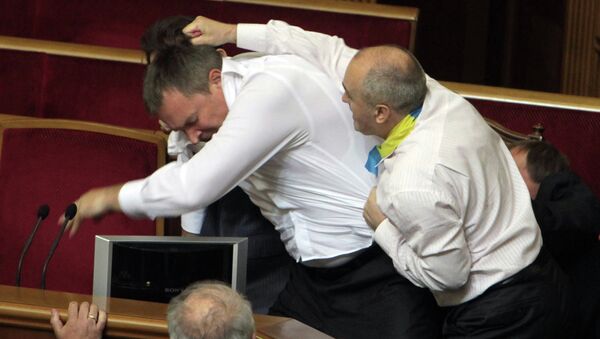 © Sputnik / Grigoriy Vasilenko
/
Go to the mediabank
Subscribe
International
India
Africa
Martial art training and fight experience seem to be necessary requirements to get into Ukraine’s parliament, as it is extremely hard to get one's point across, without throwing the right cross. Below is a compilation of most exciting fights in the Verkhovna Rada over the past few years.

Ukrainian officials may never end up winning a UFC championship belt, but they sure know how to pack a punch or two.

When things get heated in the Ukrainian parliament, lawmakers are quick to exchange punches and go for wrestling-style takedowns to settle their political differences.

The most recent incident took place this week, when Yegor Sobolev, a member of the Self-Reliance Party, squared up against Vadim Ivchenko from the Fatherland Party. The two had quite a fight. Ivchenko, dressed in a grey suit, showcased good boxing skills, bobbing and weaving while throwing loopy counter-punches over his opponent’s hands before flooring Sobolev with a perfectly-timed right cross.

Oleh Lyashko, the leader of Ukraine’s Radical Party, was knocked down following a heated discussion with another politician in a hallway of the Verkhovna Rada last year. He should have known better to keep his hands up to protect his chin when insulting a bigger man.

When one-on-one fights failed to settle arguments, situations got out of control and massive brawls broke out in the past. Wild, free-for-all fights, with the use of chairs, microphones and bottles occurred in Ukraine’s parliament on several occasions.

Ukrainian MPs are so tough that they will not back down from any fight, including a fight with Vitali Klitschko, a former boxing champion widely recognized as one of the greatest heavyweight boxers on the planet. Klitschko, who is the current mayor of Kiev, used his boxing skills to settle disputes in the Verkhovna Rada.

From the way it looks, a martial art training and fight experience seem to be necessary requirements to get into Ukraine’s parliament, as it is extremely hard to get one's point across, without throwing the right cross.