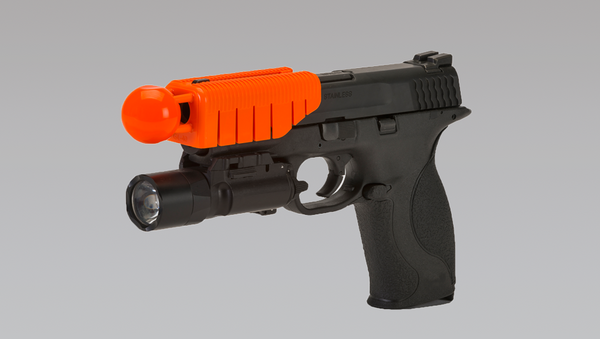 © alternativeballistics.com
Subscribe
International
India
Africa
The gun attachment that slows down bullets will be tested by the police of Ferguson, a mostly-black suburb of St. Louis.

Media reported early February that the gun attachment dubbed "The Alternative" that slows down bullets will be tested by the police of Ferguson, a mostly-black suburb of St. Louis.

‘Less-Lethal’ Gun Unfeasible for High-Stress Police Environments
The gun attachment producer also added that the product can be used by both law enforcers and private security guards all over the United States as they should "have an option in [choosing and applying] lethal force."

Despite the fact that the gun attachment can reduce mortality rates in police operations, critics say the time it takes to pull out the device and attach it to their guns can be too long for law enforcers during high-tense and high-pressure circumstances.

Ferguson came to the forefront of national attention after a local white police officer fatally shot Michael Brown, an unarmed black teenager in August 2014. The officer fired 12 bullets during the fatal arrest.

A grand jury decision not to indict the officer in November sparked nationwide protests across the United States, drawing attention to police brutality.