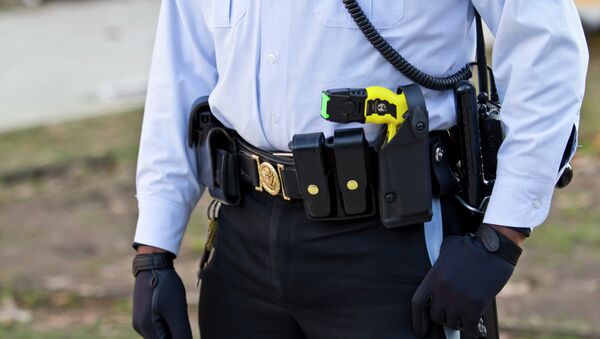 According to a police expert, the less-lethal weapon prototype firearm muzzle attachment, tested by the Ferguson police department, is unworkable in dynamic, stressful situations.

“Conceptually, I think the less-lethal weapon they’re testing seems like a neat idea but, in reality, I’m not so sure this is going to work, just based on human performance and what happens to police officers in dynamic, stressful situations,” Lichten said.

Lichten was responding to a Washington Post report that the Ferguson, Missouri police department was testing an attachment that, when placed on a gun’s muzzle, ensures that targets are incapacitated, but not killed.

US Protesters Demand Probe Into Another Killing of Unarmed Man by Police
However, Lichten, who has given expert testimony in over 100 cases at the local, district and federal levels and himself is a former police lieutenant and watch commander, said he was leery, because there are too many drawbacks, including the impracticality of attaching and detaching such as device under pressure.

“Say, for instance, a guy is 20 feet away and he starts running at you. Well, the average person can cover 20 feet in a second and a half. Do you have enough time to draw your gun, put this thing on and use it? No, you don’t,” Lichten explained.

Even more harrowing would be a situation when the less-lethal option does not work, and the officer is then forced to scramble to detach the device from the business end of his duty weapon in order to return to lethal mode, he said.

Lichten also pointed out that officers are trained to fire in bursts of two to three rounds when they see a threat, so the less-lethal model is bound to require a different type of training, considering you would probably want to begin with one round at the outset.

Not to mention, Lichten said, it is highly unlikely this innovation will appeal to many gun makers, who will rightfully complain that their product was not designed to accommodate some unknown contraption being annexed to its muzzle, which could lead to liability issues should something go awry when the weapon is discharged.