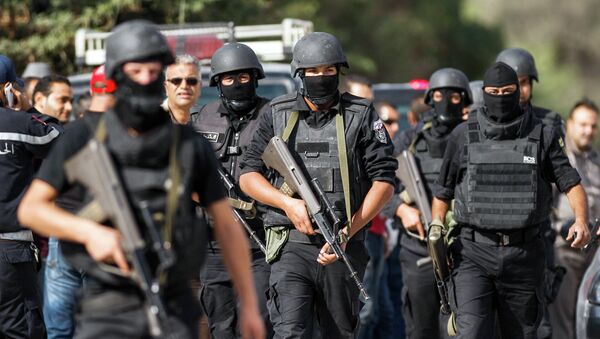 © AP Photo / Aimen Zine
Subscribe
32 suspects have been arrested on the suspicion that they were plotting attacks against the country's capital, as Tunisia forms a secular-Islamist coalition government and attacks on militants in the Kasserine mountains continue.

Tunisian Military Thwart Attempted Polling Station Attack
Tunisian authorities arrested 32 suspects around the country who are believed to be plotting terrorist attacks against security installations around the country, including the Interior Ministry headquarters in the capital, Tunisia's TAP news agency reports.

"The arrested are takfiris directly tied to the Okba Ibn Nafaa Brigade. Some of them returned from conflict zones, including Syria," the Interior Ministry spokesman, Mohamed Ali Laroui, told reporters.

He added that the Tunisian security service will continue to conduct operations around Tunisia, including its mountainous regions, and that the country has sufficient resources to stand up to the terrorist threat.

Meanwhile, Tunisian security forces are shelling areas of the country's Kasserine mountains in a campaign against Islamist fighters in the area.

Since the 2011 Arab Spring, which led to the ouster of ex-president Ben Ali, the country has became one of the largest sources of Islamist fighters traveling to Syria, including those who join the Islamic State (ISIL) militant group.