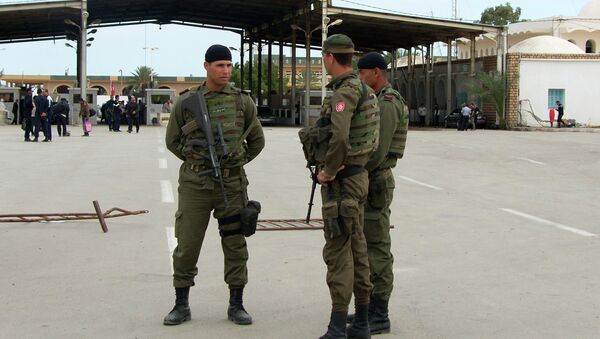 The Tunisian military has killed one gunman and arrested three others Saturday following an attempted attack on a polling station in the Kairouan Governate ahead of Sunday's presidential runoff, Agence France-Presse reported.

MOSCOW, December 21 (Sputnik) — One gunman was killed by the Tunisian military and three others arrested on Saturday following an attempted attack on a polling station in the Kairouan Governate, Agence France-Presse reported, citing a Tunisian Defense Ministry spokesman.

“The vigilance of the soldiers and the swiftness of their response thwarted [the attackers’] operation and led to the death of a man armed with a hunting rifle and the arrest of three suspects,” defense ministry spokesman Belhassan Oueslati told AFP.

The gunman is said to have opened fire on a polling station in the Kairouan region, with police shooting back in response. One soldier and one of the captured suspects are said to have suffered minor injuries, Lebanon’s Al-Manar explained.

Oueslati stated that he did not believe that radicalized Islamists were behind the attack. “Generally, the terrorists don’t use hunting rifles,” he noted.

The country’s police and military have been on high alert following a threat by Islamist militants to disrupt the second round of the country’s presidential election, being carried out Sunday. Thousands of troops and police have been deployed to ensure security on voting day, Al Manar noted.

In a video posted on the internet on Wednesday, jihadist militants had claimed responsibility for the 2013 murder of two secular politicians from the Tunisian Democratic Patriots’ Movement Party and the People’s Movement Party, which led Prime Minister Hamadi Jebali to resign from his post. The militants claimed that they would “come back and kill several of you,” and that the country’s political elite would “not have a quiet life until Tunisia implements Islamic law,” Al Arabiya earlier noted.