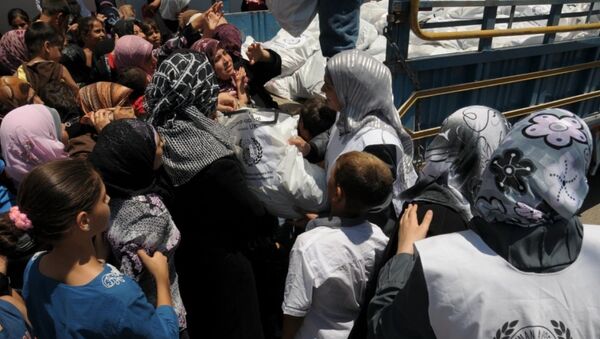 © Flickr / Human Appeal
Subscribe
Lebanon is currently home to 1.5 million Syrian refugees who fled to the country over the past four years since the war started in Syria.

Children in Syria, Iraq Tortured by Extremist Groups, Used in Warfare
MUNICH (Sputnik) — Lebanon has become a country where every other person is a refugee which puts economic, social and security pressure, Lebanese Prime Minister said Friday, adding that the only solution to the refugee catastrophe is a political settlement of the crisis in Syria.

"We all know that the only true solution of the catastrophe lies in a political solution in Syria," Tammam Salam said at the Munich Security Conference on Friday.

Salam explained that Lebanon is currently home to 1.5 million Syrian refugees who fled to the country over the past four years since the war started in Syria.

"And when we add to this number an approximate half a million refugees the country [Lebanon] has been harboring for decade, it adds up to the nation where every other inhabitant is a refugee. This is a historically unprecedented situation," Salam said.

According to the Lebanese prime minister, the large-scale presence of refugees in the country creates a number of fundamental issues "that we are trying to address with limited means."

Salam noted that the presence of the refugees in Lebanon needed to be urgently addressed.

"The massive inflow of Syrians has led first to a significant increase in crime rates, a direct result of poverty," Salam said, adding that the influx was threatening to Lebanon’s national security and sovereignty.

The civil war in Syria broke out in 2011. The country’s army is fighting against several opposition and rebel groups. According to The United Nations High Commissioner for Refugees (UNHCR), almost 4 million of Syrians have fled to Egypt, Iraq, Jordan, Lebanon and Turkey. Overall, nearly 200,000 people are estimated to have been killed in the conflict, according to the UN.