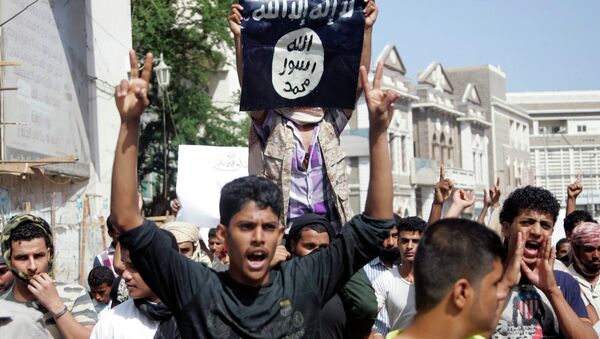 © REUTERS / Yaser Hasan
Subscribe
The Islamic State and other extremist groups kidnap, torture and kill children, and use them as soldiers, a UN representative stated.

Islamic State Believed to Use ‘Shocking’ Number of Child Soldiers: Expert
MOSCOW (Sputnik) — Extremist groups in Syria and Iraq, including the Islamic State, are torturing children and using them in warfare, a member of Office of the UN High Commissioner for Refugees (UNHCR) in Lebanon and in the Middle East told Sputnik.

In January, ISIL media outlet al-Hayat Media Center released a video of two men speaking Russian. The video states that the two Russians were members of the Russian Federal Security Service (FSB) who had been assigned to infiltrate the group. The video then shows a child shooting the hostages. The FSB and the Russian embassy in Syria have not commented on the video.

"Aside from kidnapping children, killing, beheading or burning them, we saw how children had been used in the war, in Syria and Iraq, when children shot the Russian hostage(s) to death," Ali Aqeel Khalil told Sputnik.

A Jihadist Bride's Guide to Life Under Islamic State
The insurgents often trade the organs of children, Khalil said. "Children, who refuse joining [these] terror groups, their inner organs are being cut and then traded with," according to him.

Khalil stated that the groups became "cancer-like" due to their actions, and will continue to spread until they are stopped.

"There is no international law or convention that would make these terror groups stop. There should be cooperative efforts to face them," Khalil said.

Boko Haram Publishes Photos of Children in Military Training
The ISIL, a Sunni jihadist group, has seized vast areas across Syria and Iraq, proclaiming a caliphate in June on territories under its control. A US-led international coalition has been conducting airstrikes on ISIL targets since August in Iraq and since September in Syria. The insurgents have repeatedly taken journalists, aid workers and civilians hostage, many of whom have been executed on camera last year.

According to UN Under-Secretary-General for Humanitarian Affairs, up to 350 children as young as five years old are being trained by the ISIL in Raqqa, Syria.