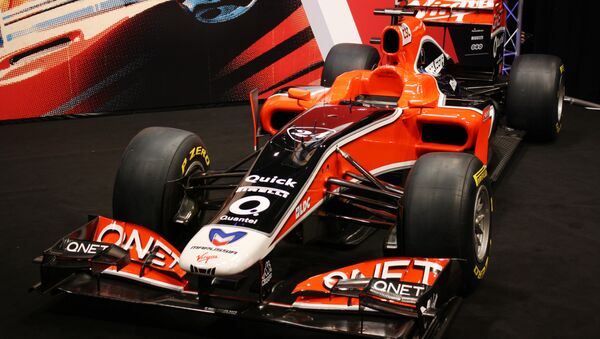 F1's Ecclestone Offers Lifeline to Marussia, Britain's Caterham Likely Out
MOSCOW (Sputnik) — Formula One team Marussia is anticipated to run in the first race of the new season now that it has been included in the provisional 2015 championship entry list under the “Manor F1 Team” name, Sky Sports reported Wednesday.

In 2014, Russian licensed constructor Marussia missed three final races of the 2014 season due to financial problems, and entered administration, meaning that the company's affairs remaining assets would be reorganized.

Earlier on Wednesday, Sky Sports said that Marussia would exit administration on February 19 via a Company Voluntary Agreement (CVA). The CVA restructuring process allows for a restructure of the business model for the team.

Will Ferrari's New 'Sexy' F1 Car Bring Glory for Struggling Italian Legend?
According to the Sky Sports, new investment to the team was secured after confirmation that Marussia will receive its estimated $45 million 2014 prize money.

Reportedly, former administrators John Booth and Graeme Lowdon will be running the team.

In 2014, Marussia, with French Jules Bianchi and British Max Chilton racing for the team, showed no significant results, and finished the season with only 2 points in the World Constructors’ Championship.