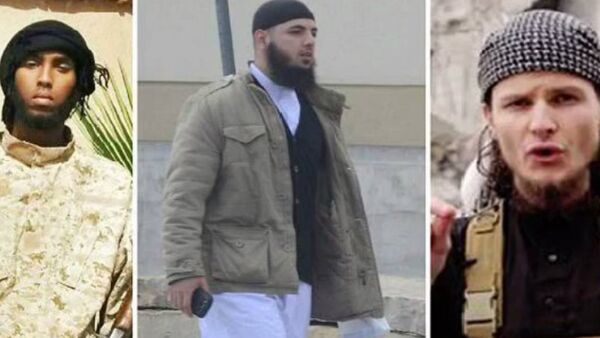 © YOUTUBE/ Briestu News
Subscribe
Police in Ottawa Tuesday arrested a man they believe is part of an ISIL recruiting group, and charged two other men in absentia--one of which may be dead.

Maguire recently appeared in a video calling for ISIL to attack Canada.

Recent reports indicate that Maguire may be dead.

The Royal Canadian Mounted Police (RCMP) Chief Superintendent Jennifer Strachan told the Associated Press Peshdary wanted to go with Maguire to Syria, but instead stayed behind in Canada. The two kept close contact, and together tried to send Canadians to Syria to join ISIL.

The RCMP also commented on the men’s social media which they say supported the allegations that they were active members of the Islamic State.

“Our evidence shows that these individuals conspired to participate in or contribute to the activity of the Islamic State in Iraq and Syria, also known as ISIS,” Assistant Commissioner James Malizia told reporters at RCMP headquarters in Ottawa.

Stratchan says the evidence gathered by the RCMP is credible, and that there is no sufficient evidence proving Maguire is dead. In addition, she explained this is not the first time Peshdary was involved a police counter-terror investigation.

The arrests and charges against the men are linked to three arrests made in Ottawa in January. 21-year-old Suliman Mohamed, along with twin brothers Ashton Larmond and Carlos Larmond were all charged for participating in terrorist activity.

Carlos Lamond was arrested at Montreal’s airport for intending to travel to Syria to participate in the activities of the Islamic State.

"It's a cell in Ottawa. Their focus seems to be on overseas activities, not on carrying out terrorist acts at home," said an anonymous government official.

In the recent months, Canada has been hit by two terrorist attacks by a group who have dubbed themselves the “lone wolves,” who are believed to be inspired by ISIL.  A gunman attacked and killed a soldier at Canada’s National War Memorial in Ottawa before being gunned down by police.  Two days earlier, a man under surveillance by Canadian authorities ran over two soldiers in a parking lot in Quebec before being shot to death by police.

Canada is taking part in the U.S.-led campaign against Islamic State extremists in Iraq and Syria.