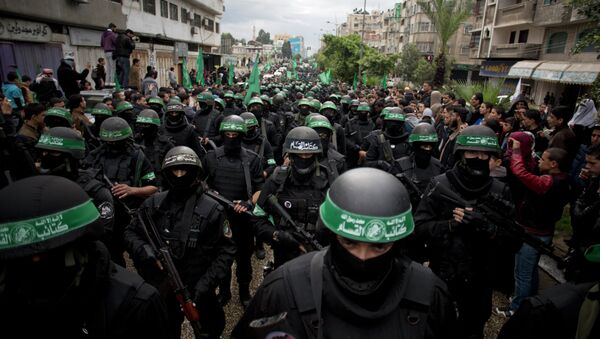 The verdict by the Cairo Court of Urgent Matters stipulates that members of the group in Egypt will be labelled a "terrorist element," Ahram Online news outlet said.

According to the media, a Hamas spokesperson in Gaza rejected the verdict, describing the decision as political.

"Al-Qassam Brigades are the symbol of resistance against the Israeli occupation, and a symbol of the [Palestinian] nation's pride and dignity, despite all attempts at defamation," spokesman Sami Abu Zuhri wrote on his official Facebook page, according to the media.

UK Stance on Hamas Unchanged Despite EU Court's Decision
Last December, the Egyptian court postponed the decision on whether Hamas should be labelled a terrorist group. The case was filed earlier in 2014 by an Egyptian lawyer following claims that the movement carried out terrorist attacks in the country using tunnels connecting Gaza to Sinai peninsula.

In August 2012, an attack blamed on Hamas at a military post in northern Sinai killed 16 Egyptian soldiers. Two armored cars were also stolen and used to enter Israel. Among 32 so-called terrorists named by the lawyer, three were claimed to be affiliated with Hamas.