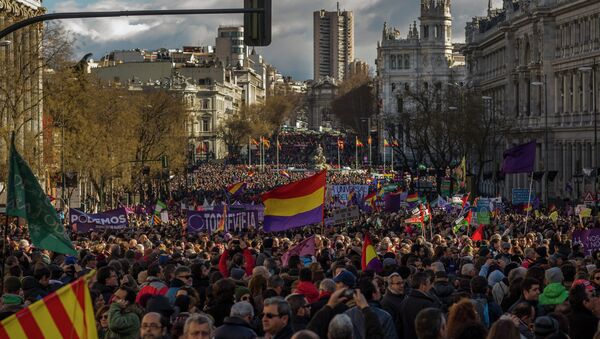 Following the victory of radical left-wing Syriza party in Greece, thousands of people gathered in Madrid in an anti-governmental rally organized by the Spanish anti-austerity left-wing party Podemos.

"Thousands of people have already filled up Cibeles [a square in Madrid], have come to tell the government of Rajoy [Mariano Rajoy, Prime Minister of Spain] that they will not continue tolerating the plundering to which we are subjected to, that we will chuck them out," Podemos wrote on its Facebook page.

More than 260 buses with more than 10,000 people from all over the country came to Madrid ahead of the rally, local media reported. Around 100 people have volunteered to carpool, a Podemos spokesperson told Sputnik.

According to the party's leader, Pablo Iglesias, the march's aim is not to protest or ask the government for anything, but to mark the beginning of change.

Following the victory of radical left-wing Syriza party, Iglesias told Rajoy to "begin the backwards countdown," according to media reports.

"Today Greece said that yes it is possible. It is the same as we shall say in Madrid on the 31: we can build a fairer country," Podemos said.