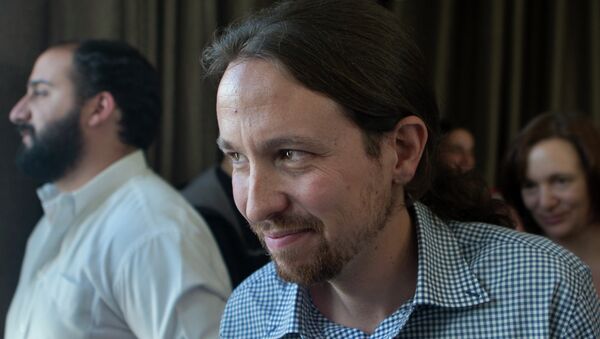 © AP Photo / Paul White
Subscribe
‘Podemos’ (engl. -“We can”) is gaining popularity among Spanish citizens and is regarded as a serious competitor for the 2015 elections.

‘Podemos’, founded by writer and university lecturer Pablo Iglesias in 2014, is reported to be the most popular of the Spanish political parties. According to a recent Metroscopia survey, 27% Spaniards expressed their support for ‘Podemos’, with only 25.5 % and 20% of Spanish citizens willing to vote for the Spanish Socialist Party (PSOE) and the governing Popular Party, respectively.

During the last European Parliamentary elections, “Podemos” managed to receive 1.5 million votes and gained 5 seats in the European parliament, being at that time only a few months old, the New Yorker reported. Such a success, political experts say, is related to the party’s excellent communication ability, sending messages about the necessity to fight corruption, strengthen  banking sector security and provide other relevant reforms. The party, experts claim, is playing on the emotions of Spaniards, 91% of whom consider the current political conditions “bad” or “very bad”.

“What you won’t hear, at least not yet, is a specific policy agenda,” the New Yorker reported. “Podemos’s success at the ballot box depends on keeping party pronouncements flexible and all encompassing in the run-up to next year’s elections”. El Pais goes further and calls Podemos “a group with a catastrophic diagnosis and a will to disqualify, that rejects being either left-wing or right-wing to hide what it really is: simple and vulgar populism like that which, with other ideological lenses, appears in different parts of Europe.”

However, such criticism has not prevented ‘Podemos’ from winning support for various initiatives, including its plan for a centralized leadership model. According to El Pais, the initiative was backed up by 80.7% of the poll participants.

The survey was conducted in the light of a triple occurrence of elections, on the local, regional and national level, in 2015. According to the newspaper, the regular CIS survey, which will be released on Monday, also shows similar results and is not good news for the ruling forces.