Almost Half of Germans Afraid of Terror Attacks at Home 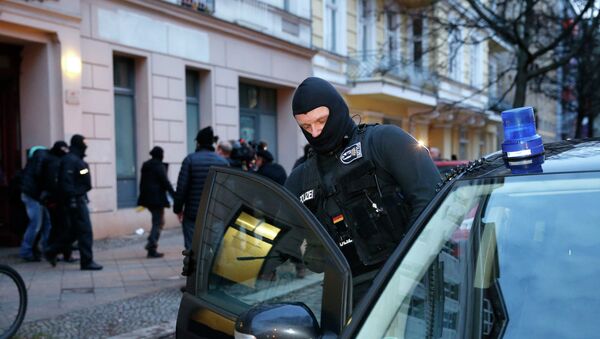 © REUTERS / Fabrizio Bensch
Subscribe
International
India
Africa
Almost half of Germans fear their country could be next in line for terrorist attacks, a week after gunmen killed 17 people in and around Paris, a nationwide survey by the German television channel ARD has found.

Merkel: Germany Protects Citizens of All Confessions From Terrorism
MOSCOW, January 16 (Sputnik) – Around 45 percent of Germans are afraid that the Paris atrocities could be repeated on German soil, according to the DeutschlandTrend opinion poll, published Friday on the ARD website. A similar survey last week indicated that the number of people concerned about their security in the face of the rising Islamist threat after the Paris attacks was slightly higher, at 49 percent.
Germany May Confiscate ID Cards of Suspected Terrorists: Interior Minister

Two-thirds of respondents across Germany said security services must do more to tackle existing gaps in security. An equal number of Germans said tighter security and surveillance is reasonable enough in times like this. About 30 percent confessed they are now on the lookout for any suspicious people or objects.

The opinion poll was carried out in the wake of a deadly attack on the headquarters of French satirical magazine Charlie Hebdo and a kosher supermarket in the 20th arrondissement of Paris last week, but before late Thursday's counterterrorism raid in Belgium, which targeted a group of alleged gunmen returning from Syria. The operation saw two suspected jihadists killed, with a third wounded and in custody.