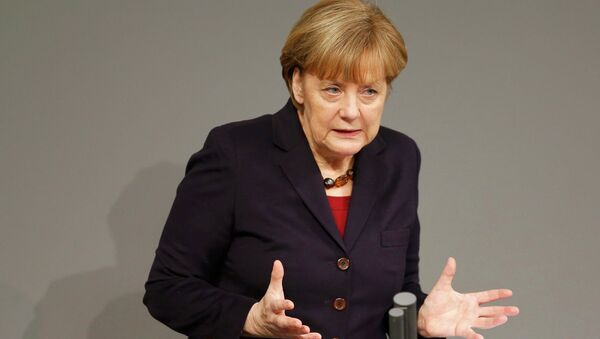 © REUTERS / Hannibal Hanschke
Subscribe
International
India
Africa
There are some "separate forces" in Germany that have joined jihadists, the chancellor added.

Latest Charlie Hebdo Issue on Sale for $120,000 in Online Auctions
MOSCOW, January 8 (Sputnik) — Germany does everything to protect its citizens, who belong to different confessions, from terrorism and will continue to do so, German Chancellor Angela Merkel said Thursday.

"We do our best to protect the people of any religion [from terrorism], whether they are Jews, Christians or followers of Islam, and will continue to do so," Merkel told reporters in Berlin.

The chancellor added that "unfortunately, there are some separate forces in Germany that have joined jihadists."

Le Pen Urges Reintroduction of Death Penalty After Charlie Hebdo Massacre
Merkel's statement comes after the Wednesday attack by the alleged Islamic extremists on the office of the French satirical magazine Charlie Hebdo in Paris, killing 12 people and injuring 11 others.

The satirical magazine had previously received several threats from radical Islamists over its publication of caricatures of the Prophet Muhammad. Among the latest posts on the magazine's Twitter feed before the attack was a cartoon mocking Abu Bakr Baghdadi, the leader of the Islamic State militant group.

Thursday, January 8, is declared a national day of mourning in France. National flags will be flown at half mast for three days.