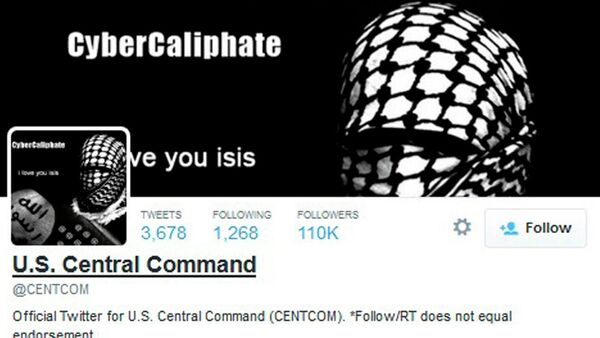 Pentagon Takes Measures to Address CENTCOM Cyberattacks: Defense Official
WASHINGTON, January 12 (Sputnik) – US authorities are investigating a breach of US Central Command’s Twitter and YouTube accounts by hackers, claiming to belong to the Islamic State, the White House said Monday.

“This is something that we’re obviously looking into and something that we take seriously, however… there is a pretty significant difference between what is a large data breech and the hacking of a Twitter account,” White House press secretary Josh Earnest said at a press briefing. “We are still examining and investigating the extent of this incident.”

Hackers, claiming to be affiliated with the Islamic State, briefly hacked US Central Command’s Twitter and YouTube accounts on Monday. Taking control of the command’s Twitter feed for nearly an hour, the hackers praised Allah and said the “CyberCaliphate continues its Cyber Jihad.”

Islamic State Hacks CENTCOM Social Media Accounts
Writing, “American soldiers. Watch your back. We are coming,” the hackers released what is allegedly the contact information of senior CENTCOM officers and threatened them and their families. It then posted what appeared to be US military plans related to North Korea and China.

Simultaneously, a nearly three minute YouTube video in Arabic with flashing English wording was posted on Central Command’s account before being removed. The flashy video showed fighters and tanks while extolling the virtues of the Islamic State and calling for revenge against infidels and Jews. The video was later removed.

Monday’s hack came as US President Barack Obama announced earlier in the day plans to boost cyber security and consumer data, following the hack on Sony in December. On Tuesday the president is expected to visit the National Cybersecurity and Communications Integration Center to discuss better information sharing between the government and private sector.