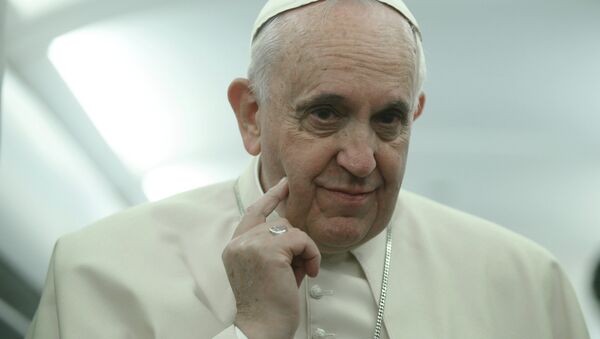 © AP Photo / Filippo Monteforte, pool
Subscribe
The stances of Russian Orthodox Church and the Catholic Church coincide regarding the issue of protecting the "unshakable Christian values," press service head for Patriarch Kirill of Moscow and All Russia said.

Pope Francis Expresses His Will to Meet Head of Russian Orthodox Church
MOSCOW, January 5 (Sputnik) — The Russian Orthodox Church stated that it understood and shared the stance of Pope Francis on multiple important issues regarding public morals and the state of Christianity in Europe and the Middle East, Deacon Alexander Volkov, press service head for Patriarch Kirill of Moscow and All Russia, told RIA Novosti.

“In the recent years there were a lot more common grounds than dividing points between us and our brothers Catholics, if we are talking about attitudes towards the public life and Christian approach towards the realities of our world. Here our positions coincide and that allows to say that our churches are becoming closer [to each other] regarding the issue of protecting the unshakable Christian values,” Volkov said.

However, according to the Deacon, it is still too early to talk about a meeting between Pope Francis and Patriarch Kirill mostly because of the Ukrainian Greek Catholic Church actions, which are the main obstacle.

Pope Francis Prays for Peace in War-Torn Ukraine, Iraq, Syria
Volkov added that due to its importance, the meeting between Pope Francis and Patriarch Kirill should be more than a mere formality.

“It [the meeting] should not be turned into some kind of a formality, when in public Patriarch and Pope will be smiling and saying common phrases and behind the closed doors they will discuss the existing problems in strong terms,” Volkov said.