Suspected Ebola Patient to Be Hospitalized in Sweden: Reports 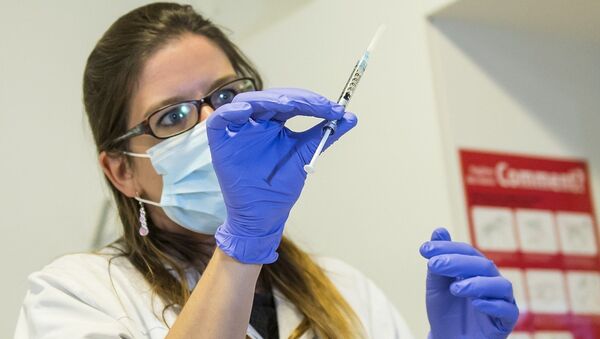 A Swedish nurse may have contracted the virus when a glove she used while treating an Ebola patient was torn. No Swedes have been diagnosed with the disease so far.

Suspected US Ebola Patient to Be Hospitalized in Nebraska: Hospital
MOSCOW, January 4 (Sputnik) — A Swedish nurse who is suspected of having contracted the deadly Ebola virus while working in Sierra Leone will soon be transported to a hospital in the Swedish city of Lund, local media reported Sunday.

“We made the decision to send her home. We wanted to be safe rather than sorry,” Mattias Frick, medical coordinator at the Swedish Civil Contingencies Agency was cited as saying by the Sydsvenskan newspaper.

London Hospital Says British Ebola Patient in Critical Condition
The Swedish healthcare worker has not displayed any symptoms, according to the newspaper, though the virus’ incubation period may last several weeks. The woman was reportedly exposed to the virus when a glove she used while treating an Ebola patient was torn.

No Swedes have been diagnosed with Ebola as of today, though several foreign healthcare workers have contracted the virus while taking part in Ebola response in West Africa. A British nurse who was infected with Ebola in Sierra Leone is currently in critical condition at a London hospital, while a US healthcare worker who was exposed to the virus is soon to be admitted to a hospital in Nebraska.

Ebola Outbreak in 2014 Claims Close to 8,000 Lives: WHO
In October, a doctor from Sweden’s neighboring Norway who contracted the virus in Sierra Leone made a full recovery and was discharged from an Oslo hospital.

The current outbreak in West Africa began in late 2013 and has claimed the lives of more than 7,900 people, according to the latest WHO estimates, while more than 20,200 cases of confirmed and probable infection have been registered.