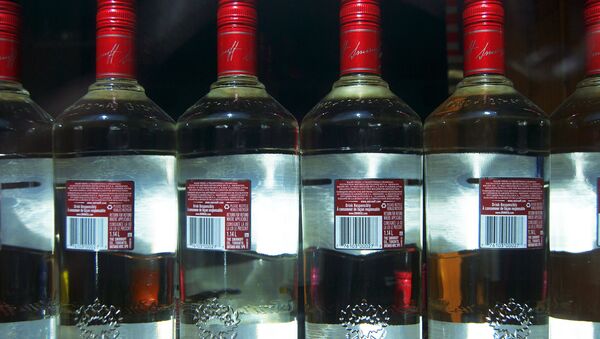 CC BY 2.0 / marc falardeau / Vodka
Subscribe
The new warning was issued after 166 bottles of counterfeit vodka were seized by Trading Standards officers.

Prominent Britons Press Government to Legalize Assisted Suicide: Reports
MOSCOW, December 29 (Sputnik) — Thousands of bottles of fake and potentially deadly vodka were discovered on sale in the UK, according to The Telegraph.

The new warning was issued after 166 bottles of the counterfeit spirit were seized from three stores in Luton by Trading Standards officers. Another raid on an illegal factory in Derbyshire resulted in the seizure of 20 thousand empty bottles, filling equipment and empty cans of anti-freeze, the newspaper adds.

Bottles of fake vodka which contained a chemical used in anti-freeze were also seized in Somerset.

According to The Independent, the bottles of counterfeit drink were disguised as popular vodka brands, such as Glens, Kommissar and Smirnoff. Some bottles had fake 'duty paid' stickers, while labels on others contained spelling mistakes.

"Commonly used substitutes for ethanol include chemicals used in cleaning fluids, nail polish remover and automobile screen wash, as well as methanol and isopropanol which are used in antifreeze and some fuels," professor Paul Wallace, chief medical advisor of the Drinkaware group, said, according to the newspaper.

Heavy Snowfall in France and Britain:One Dead, Thousands Trapped by Weather
Partygoers across the United Kingdom were warned that there were criminal gangs seeking to profit from the increase in demand for strong alcohol, The Belfast Telegraph adds.

The Independent also points out that in 2009, authorities busted a criminal group that used methylated spirits and bleach to produce as much as 165,000 bottles of counterfeit Glen’s Vodka. The ringleader was convicted to seven years in prison in 2011.