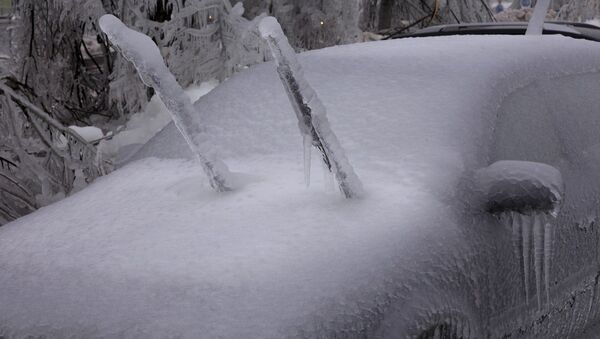 © East News / Marko Korosec/Solent News
Subscribe
The snow and freezing rain in UK and on the way to the French Alps caused death of a 27-year-old man and paralyzed traffic, leaving thousands of people stuck in their cars, chalets and airports.
Yellow Severe Weather Warning Issued For Most of UK as Gonzalo Arrives
MOSCOW, December 28 (Sputnik) — Around 15,000 cars of skiers trying to make their way to and from the French Alps resorts were stuck due to heavy snow, the Telegraph reports, citing local media. Thousands of people were trapped in their cars, chalets and airports as a result of an abundant snowfall in the Savoie region in southeastern France.

The snow and freezing rain also lead to the death of a 27-year-old man whose car skidded off the road into a ravine in the Belledonne mountain range.

At Chambéry airport, 2,063 people were unable to leave the site — the majority of them British.

Two bus crashes were reported on the road to La Plagne, causing six-mile traffic jams, according to ski company Adventures in the Alps.

Local authorities said they had activated an emergency plan to re-house stranded holidaymakers, unable to reach the vacation hotspots. The Ministry said 20 emergency shelters were being opened with 12 of them across the Savoie region — among them Albertville, Bourg Saint-Maurice, Moûtiers, and Chambéry.

In other parts of France storms reaching 100 mph led to the temporary closure of Calais and suspension of cross channel car ferries.

A heavy snowfall in UK had led to closing roads and airports and bringing chaos to large parts of the country.

Sleet and snowfall hit the north of England, the Midlands and Scotland, with the Met Office weather and climate service warning on Saturday that nearly all of Britain had been covered by ice.

Slightly concerned I might not be able to get home to #sheffield today! #snow pic.twitter.com/arwpuo2u3y

Both Liverpool's John Lennon Airport and Leeds Bradford International in Yorkshire closed while their runways were cleared of snow.

The forecasters have announced a yellow 'Be Aware' warning for all of the country, with the exception of the Western Isles, from 10:00 p.m. GMT on Friday until noon on Saturday.