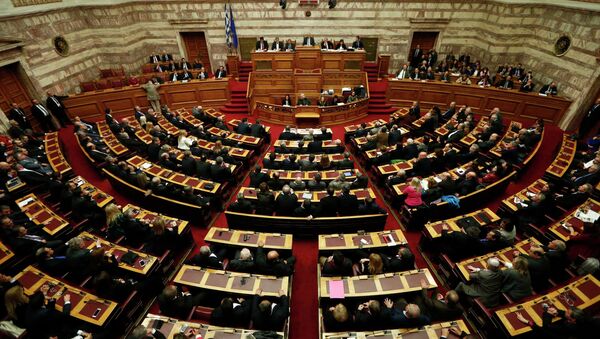 © REUTERS / Alkis Konstantinidis
Subscribe
International
India
Africa
The failure of Greek lawmakers to agree on a new president has left stock markets in the Eurozone in an uncertain state over the decision's knock-on effects on EU monetary policy.

Greece Heads to Poll Again, as Second Round Proves Indecisive
MOSCOW, December 29 (Sputnik) – News that the Greek parliament has failed in a third attempt to elect a president caused the Greek stock market to plunge on Monday, amid fears about the political instability in the country ahead of its January 25 government elections and its consequently unstable climate for investors.

The figures reflect the fear that volatility in Greece will prompt a knock-on effect in the European markets, where three rounds of voting in parliament to elect a president have failed to gain a majority for the coalition candidate, former European Commissioner Stavros Dimas.

On Monday, Prime Minister Antonis Samaras announced in a televised address that he intended to propose early elections on January 25 in order for a new government to be formed. "All those who have voted against are responsible for an event that Greek people did not want," he declared, according to Reuters. "It's time for Greeks to do what parliament has not done: to end uncertainty and restore stability."

Greece Intends to Exit EU-IMF Bailout Program a Year Ahead of Schedule
However, opinion polls in Greece suggest growing support for the opposition left-wing Syriza party, which advocates policies that are in opposition to the austerity policies imposed by the bailout program Greece agreed upon with the European Union and International Monetary Fund. AP reports party leader Alexis Tsipras declared on Monday that the dissolution of parliament was a "historic day for Greek democracy," and added: "With the will of our people, in a few days, the austerity agreements will also belong to the past."

The Chief Economic Adviser at the Centre for Economics and Business Research, Vicky Price, has commented that the problems besetting Greece are representative of a wider frailty of the European framework. "Arguably Greece is just a symptom of this malaise and its current problems exemplify what is wrong with the Eurozone as a whole," she wrote in ThisisMoney on Sunday. "The worry for the markets is that if Greece is once again plunged into a crisis that could spread elsewhere."

The anti-austerity manifesto of the Syriza party, for whom latest poll results released December 20 forecast an election win, includes renegotiating the country's level of debt, renationalizing parts of the economy, and increasing wages, policies which run in opposition to the economic policy planned by European Union institutions. The worry for investors is that such a divergent approach could lead to the country's exit from the Eurozone, and default on its debts.