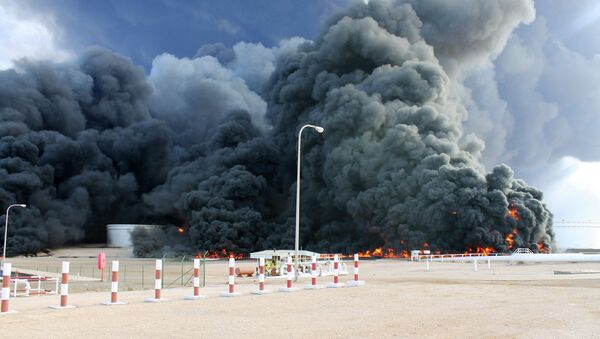 MOSCOW, December 28 (Sputnik) — Fire reached the fifth oil tank on Saturday at one of Libya’s main oil terminals after a rocket attack by Islamist militants on Thursday, reports Al-Arabiya.

The rocket that was fired by Islamist fighters from the group Fajr Libya (Libya Dawn) damaged part of Libya’s main oil terminals. One oil tank was hit before the fire spread to two other full tanks at al-Sidra terminal, which is in the eastern region known as the “oil crescent”, and is the base for other terminals.

Africa
UN Support Mission in Libya Urges to Stop Attacks on Libya's Oil Depots
By Saturday the flames had engulfed two other storage tanks. It is estimated that the amount of crude lost to the fire so far is more than 1.6 million barrels, as reported by Al-Arabiya.

The United Nations Support Mission in Libya (UNSMIL) said in a statement that it “strongly condemns” attacks on Libya’s oil installations.

“The mission warns of the environmental and economic consequences as a result of this violence and destruction in the oil crescent area, and urges the forces on the ground to cooperate in order to allow the fire crews to extinguish the blaze,” it said.

According to region’s security spokesman Ali-al Hassi, the national fire department has refused to extinguish the fires, and sovolunteer firefighters have had to come forward to fight the flames with the help of oil installation guards, reports Al-Arabiya.

Oil Prices Rise Amid Militant Attacks on Libyan Oil Depots
“They are doing their best to extinguish the fire and are working under difficult conditions,” Hassi said.

The United Nations further added that the attack on oil terminals is a “clear violation” of U.N. Security Council resolutions on Libya.

“Libyan oil belongs to all the Libyan people and is the country’s economic lifeline,” it said, advising all sides to “desist from any action that endangers this strategic national asset.”