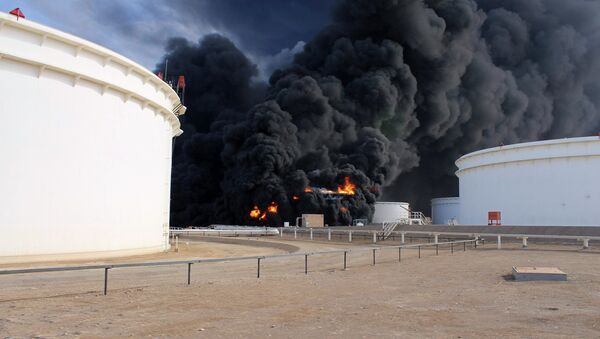 Oil Prices Rise Amid Militant Attacks on Libyan Oil Depots
MOSCOW, December 28 (Sputnik) — The United Nations Support Mission in Libya (UNSMIL) condemned in a statement renewed attacks on Libya’s oil installations by unidentified gunmen and urges the forces on the ground to cooperate in restoring order.

“Libyan oil belongs to all the Libyan people and is the country’s economic lifeline. The Mission reiterates its call on all sides to safeguard Libya’s oil installations and to desist from any action that endangers this strategic national asset,” the mission said in a Saturday statement.

On Thursday, the Libya Dawn Islamist group fired a rocket on the country’s largest oil depot setting the storage tanks at the el-Sidr oil terminal ablaze. Following the attack on the oil depot, unidentified gunmen attacked and killed several guards on duty at the power station in the city of Sirte.

UNSMIL urged Libya’s “influential actors to make every effort to bring an end to this senseless cycle of violence”. According to the statement, the escalation in the oil depot area is further inhibiting ongoing efforts to convene political dialogue.

Since clashes erupted between the militant group and pro-government forces on December 13, the country’s two main oil ports, Ras Lanuf and Es Sider, have remained closed, causing Libya’s oil production to drop while causing oil prices to hike on Friday.

Libya is facing a wave of violence since the 2011 overthrow of Muammar Gaddafi. The country has seen fierce clashes between numerous militias and pro-government forces.