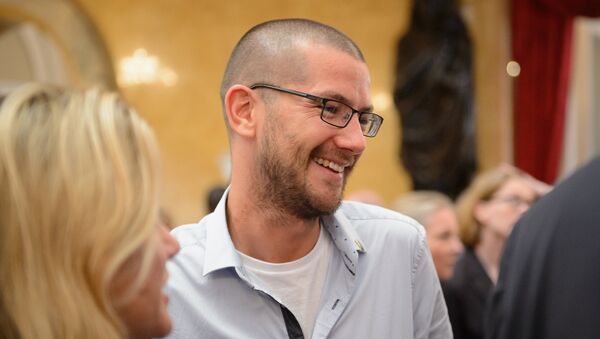 William Pooley, the British nurse who survived the Ebola virus disease and returned to Sierra Leone to continue his medical work, has called on the world to tackle the outbreak. That would be "a wonderful present", he has added delivering the British alternative Christmas message.

At Least Another Year of Ebola Ahead: Expert
MOSCOW, December 25 (Sputnik) – The British health worker who survived Ebola Will Pooley delivered an alternative Christmas message Thursday, calling for a global solution to the epidemic.

The British alternative Christmas message is an annual message which is different from the one delivered by Queen Elizabeth II.

"This [Ebola] is a global problem and it will take the world to fix it," Pooley said, addressing the people of the UK. "What a wonderful Christmas present that would be."

In August, Pooley was the first Briton to be evacuated from West Africa with Ebola. After his recovery, Pooley returned to Sierra Leone to continue working as a nurse. "My exposure to this disease reinforced the belief that when people need help, it's important that it's given," he said.

China to Test Its New Ebola Vaccine on Humans in December 2014: Ministry
According to him, people suffering from Ebola in Africa do not have the luxury of being born in a wealthy country like he did, and many died "lonely, miserable deaths" without receiving proper medical attention.

Ebola is a deadly disease that spreads through direct contact with the bodily fluids of an infected person, or though contact with contaminated clothing or possessions. Currently there is no known cure or vaccine for Ebola. Several countries, including Russia, are in the process of developing a vaccine for Ebola. According to the World Health Organization (WHO), the epidemic has claimed the lives of more than 7,500 people this year, mainly in Guinea, Sierra Leone and Liberia.