China to Test Its New Ebola Vaccine on Humans in December 2014: Ministry 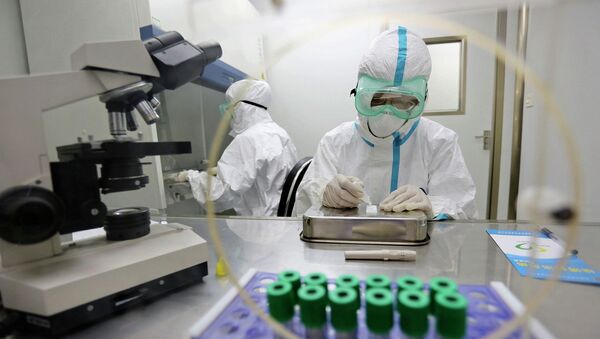 © China Daily
Subscribe
China's military will test its new Ebola vaccine on humans this December, according to the country's Defense Ministry.

"The vaccine has recently passed appraisal by state and military authorities and will begin clinical tests in December," China's Defense Ministry spokesman said as quoted by Xinhua, a Chinese state-run media outlet

A team of scientists at the Academy of Military Medical Sciences developed the vaccine and according to Yang, it is the first 2014-genetic mutation Ebola vaccine in the world.

US Speeds Up Ebola Vaccine Trials, Large-Scale Manufacture
Since the beginning of the outbreak, over 300 Chinese military medics have been sent to Sierra Leone and Liberia in order to counter the spread of the deadly disease. The Chinese doctors are collaborating with the World Health Organization (WHO), Doctors Without Borders (MSF), as well as with local authorities in Africa and UN peacekeepers.

"A strong and steady helping hand comes from China, which has been by Africa's side since the onset of the Ebola fight. When Ebola just broke out in April, Beijing immediately offered emergency relief to the three West African countries," Xinhua reports.

Ebola Survivor to Deliver UK Channel 4's Alternative Christmas Message
According to the media outlet, Beijing has already provided those African countries heavily struck by the Ebola virus with $122 million of financial assistance. Furthermore, some 500 Chinese health workers are currently working in Africa, fighting the deadly virus and preventing the spread of infection.

Xinhua reveals that in the past 50 years China has deployed over 20,000 medics in 51 African states and regions, saving millions of lives there.

It should be noted that Ebola has already claimed the lives of 7,588 people worldwide, according to the latest WHO's data, while the total number of Ebola cases reached 19,497. Three West African states, Guinea, Liberia and Sierra Leone, have been hit the most.