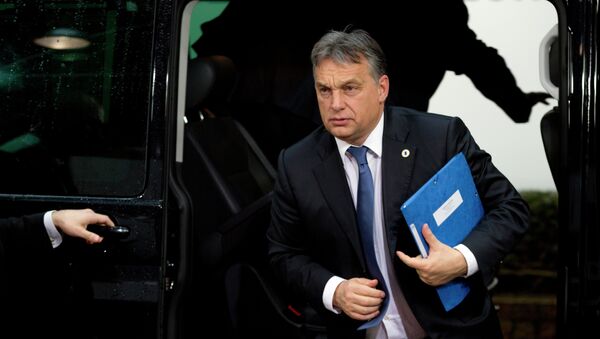 Prime Minister Viktor Orban told Hungarian television that the US was meddling in its internal affairs, and trying to draw the country into a harmful conflict with Russia, which Hungary will 'stay out of'.

MOSCOW, December 24 (Sputnik) — In a year-end interview for Magyar Television on Tuesday, Hungarian Prime Minister Viktor Orban said that the US is meddling in Central European countries' internal affairs, and attempting to draw Hungary into a harmful conflict with Russia.

Hungary Summons US Ambassador After McCain's 'Neo-Fascist Dictator' Remark
"The cards were being redealt worldwide", Orban said about 2014, noting that "we have entered a new era" in international tensions. Orban added that the US has sought to "draw [Hungary] into a conflict that we cannot come out of well," and that it would be in Hungary's interest "to stay out of it."

Orban noted that Hungary's foreign policy position on the tense situation over Ukraine is mostly in line with that of Germany, and that countries need to work together with Russia instead of working against it in order to resolve conflict.

Orban was earlier criticized by US officials for his independent foreign policy position, Arizona Senator John McCain calling him a "neo-fascist dictator". Orban responded to the comments by saying that such remarks were "an attack on national independence." Orban had earlier earned the ire of Brussels and Washington back in August, when he said that the sanctions policy against Russia had 'shot Europe in the foot.'

Hungarian PM Blasts Brussels for Ruining South Stream Project
Responding to the US's placing of six Hungarian officials in his government on a no-entry list to the United States on allegations of corruption, Orban noted that "every thinking man knows that the corruption charges are a cover story." He added that the US desire for political influence is behind the decision. The prime minister noted that the evidence to back up the charges is "somehow never provided," and that the baseless charges were a typical side effect of a secret service play for influence, Politics.hu explained.

Orban noted that the Americans' failed bid to build a nuclear power plant in Hungary was another factor in the straining of relations. He noted that the Hungarian-Russian construction and finance deal to build two new reactors at the Paks nuclear plant has been "painful" for Washington.